We believe that the preconditions of dignity are relative. The more we help refugees internationally, the more we see how delivering dignity can change.

Once we move past the need for food, water, and shelter, dignity evolves, becoming more integrated with the need for choice and freedom. Dignity becomes the ability to choose from or reject what is available, rather than being restricted to what is given.

Katsikas camp is a great example of how the definition of dignity evolves. Once new residents have settled in, dignity becomes the ability to choose what food they want from the Free Shop, rather than being handed a parcel of food items selected by us. And what is needed to feel dignified continues to change as people’s circumstances evolve.

One of our focuses this year in Greece is to give the rooms at Katsikas camp back to residents, so that they can manage their own space and choose how they wish to spend their free time. We have relocated our free shop and handed the old room over to the people on camp, and over the last few weeks, volunteers and residents have been working to transform this room into a perfect place for escape: a cinema.

It was Mohammed from Kuwait, resident at Katsikas, who raised this fabulous idea. But before it could become a reality, we needed to raise £400 pounds for a projector to get started.

Mohammed says: “The life on the camp (or prison life) is everyone waiting, no jobs, no work to do. It’s boring and sad. A cinema inside the camp would be a good idea for children and adults. Everyone can be involved. I want to show children’s movies, educational and schooling programs. For adults I think comedy movies from each others countries and documentary programs that can help us learn.”

Over the last few weeks, donors have raised over £600 to go towards a projector, and with the cinema already open, we know that Mohammed is going to do a brilliant job running oit for everyone on the camp. 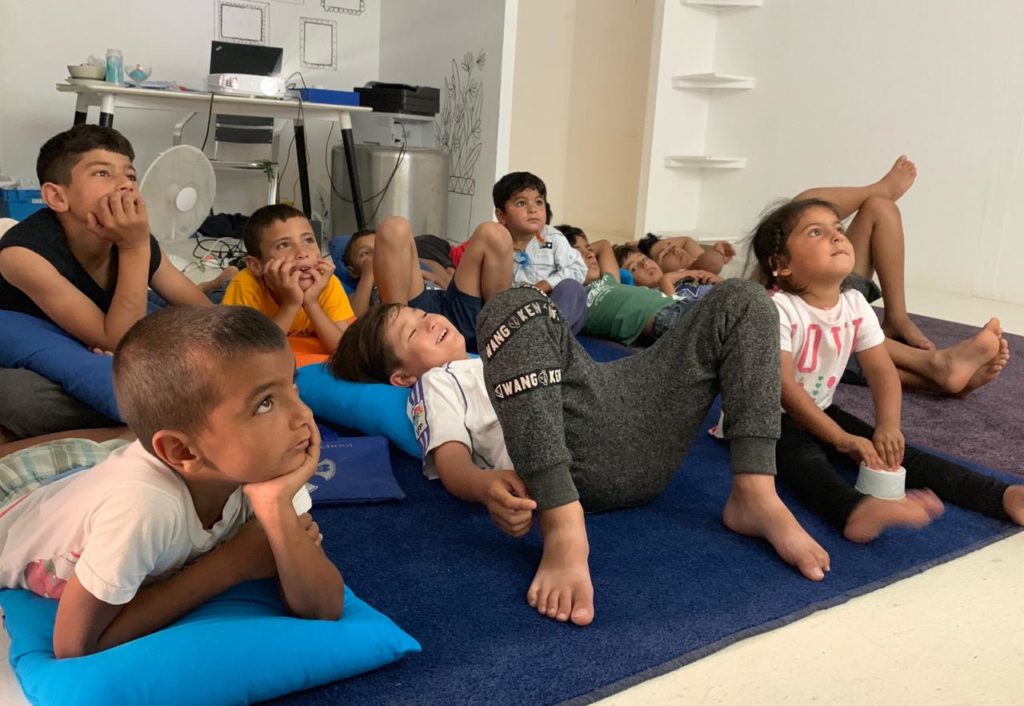 Above: Kids already enjoying the new cinema at Katsikas

At Refugee Support, we are constantly asking ourselves ‘what is dignity?’ and ‘what can we do to make people feel more dignified?’ We began with our Free Shop in Greece, moving on over time to ventures such as our Empowerment Fund. And now, handing over some of the camp to the people who actually have to live there, we hope to continue to move and evolve with the definition of dignity, and do all that we can to bring dignity and normalcy to people’s lives at Katsikas camp.

The constant maintenance and improvements not only of Katsikas camp, but of our ethos as a charity, is all down to the brilliant volunteers who are the backbone of all we do. Check out some more of the other new rooms we have created in Katsikas below, and read about how we plan to help refugees internationally, and evolve with dignity over the next three years.

Above: A new kids’ language classroom (which used to be mens boutique)

Above: A new adults’ language classroom (which used to be a shoe shop)

Above: A new child friendly space (which used to be mini market)

Volunteers have had a busy preparing the new Dignity Centre in Nicosia, Cyprus, for our open days on 13,14 and 15 June. We officially open on 17 June.

There’s still lots to do, but the school on the second floor is nearly finished, and the washing machines for the laundry have been delivered. The work is being shared between the landlord, local builders, and our volunteers.

Last Wednesday, we received our first container of donations from the UK sent to us from CARE UK. We would like to say a huge thank you to everyone who made this possible. Many of the items will take pride of place when we open The Dignity Centre on 17 June.

We can’t wait to open, and we know the centre is going to bring dignity and hopefully, much joy to refugees in the area who desperately need it.