When I told my family about the idea of volunteering in Greece we were having lunch. They stopped eating at once. They stared me for a full minute, the food still trapped in their mouths, no one said a word.

My daughter was the first to react: “Pero, mama, eso es peligroso!” (But Mum, that could be dangerous!”) I suspect that this was not the main feeling they had about it. It just took them by surprise. They know me, after all.

My husband tried to reassure her, “You know what a chicken your mother is…if it were dangerous, she wouldn’t even think about doing it.”

That is true, I have never been a courageous girl – I’ve always wished I were, and I still do – that’s why I admire people who have the guts to just go forth and stand by their ideas, determined to do something and not let anyone stop them.

In the months to come, all kinds of impressions and reactions followed that initial stunned moment. At first, my children looked at me as if they had never seen me before, not knowing what to think. Eventually, there was a glint of admiration in their eyes, which is amazing, because they are teenagers. The reason was that they had told their friends about it and their friends’ reaction had been “WOW!” Then there were my husband, my parents, my brother, my friends, my colleagues… I had to calm them down and explain that I was not a hero, nor a missionary, nor a saint, nor completely off my rocker.

I have now volunteered twice with Refugee Support in the last two years. The first time in LM Village and my second stint was in Katsikas. Why RS and not another NGO? I consider it another happy coincidence that makes me think how lucky I am.

I am a librarian at a University Library, and a translator, too. One day three years ago I received an email from someone asking for help with setting up a small library at a refugee camp in Greece. I got involved in the project by supplying duplicate Arabic books from the library I work at and raising funds for their shipment. It was a satisfying experience. Shortly afterwards, I came across some photos on Facebook of the parcels we had packed here being opened up over there. That was the moment when I thought, “I wish I was over there.” From then on, I tried to keep up with what was happening in the Greek camps, and that’s how I came across RS. I loved the idea of helping people maintain their dignity and also the notion of supporting the local Greek economy. I believe the fair way of helping is by embracing the concept of “help between equals.”

The following year, I had the fortuitous chance to travel to Greece for the first time in my life. Four months later, I did it again, my destination being LM Village’s camp.

It was a great decision. My mind has never been as active as it was during my stay there. I was firing up parts of my brain that had been entirely dormant before, and I felt the overwhelming need to record my experiences every evening after returning from the camp. Sometimes I would wake up in the middle of the night and just start writing. Every day I spent there left a profound impression on me, and I wanted to hold on to every single detail of what I saw, felt and thought. Even now, whenever I go back to those many pages I wrote then, it raises my spirits. The whole experience made me feel free and happy. Everything that happened there was filled with life, meaning, emotion, sun and enjoyment. I’m well aware that this may sound paradoxical to some. And it is. 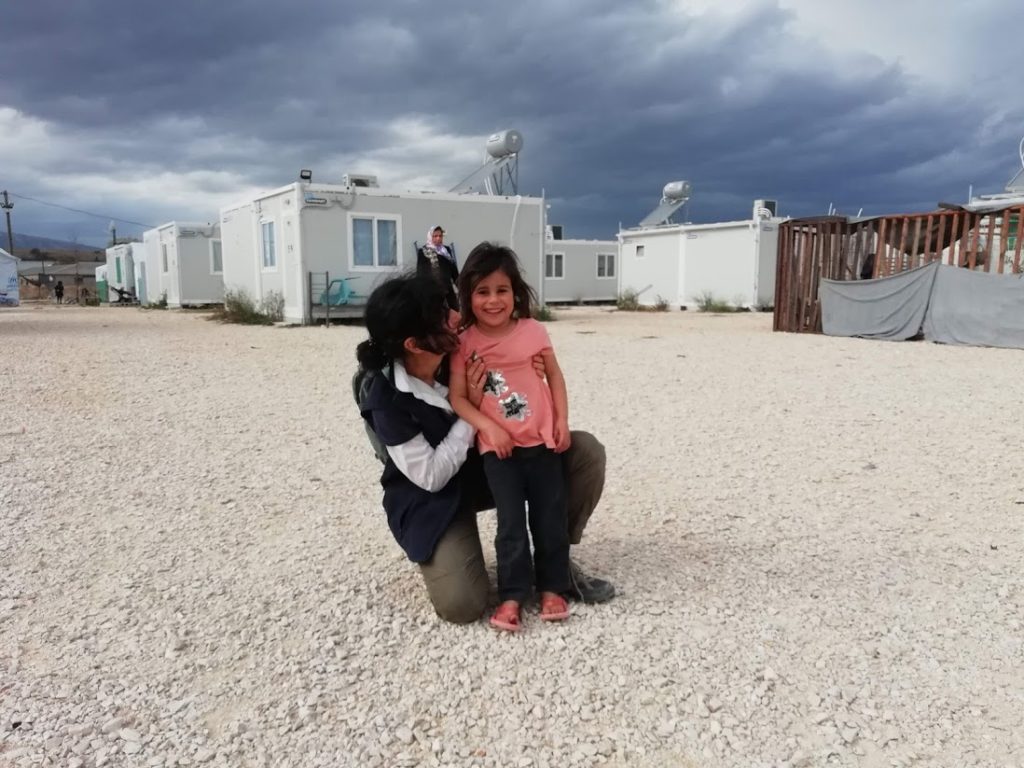 Back home, when I see photos of RS in social media, a strange feeling invades me, as though I had recently moved house, as though I were, in fact, looking at my previous neighbourhood, it brings back the memories of all the people I shared my life with for a time. They are still there, but I’m not, and suddenly I’m seized by a pang of nostalgia. I start wondering how things are going for them, what happened to them after I left, whether their small gardens are flourishing, how the communal spaces are improving… and I am yearning to be back there with them.

That is the way I like to think about the days I spent there: As having lived in a different place with people I would otherwise never have had the chance to meet, doing a kind of work that has nothing whatsoever to do with my day job, finding out that I can mould myself into what my environment needs me to be, that things can be thought of and perceived in an entirely different way.

Lives from distant corners of the globe come together in a refugee camp. People from Syria, UK, Kurdistan, Australia, Afghanistan, Spain, Pakistan, USA, Iran, Germany, Somalia, Ireland, Congo or China step into the shop every day. Some are customers, some attend to them as they shop, some restock the shelves with oil and flour, some help to look for the right size of a children’s garment. Some of them chat together in front of the cafeteria. Some of them draw, do their homework, some of them clean, some of them laugh as they play with the trolley… Some of them arrived there dragged by a cruel and inexplicable fate you don’t dare to ask about because you feel you don’t have the right to do so and because it seems like an abyss – you are afraid to lean over the edge. And some of them chose to be there because they are lucky enough to have a choice of what to do with their lives and have decided to lend a hand to those denied that privilege.

I remember one of my last days in Katsikas. I was on my way back to the hangar after having washed the dishes. The day was over, and the camp had quietened down. I spotted a group consisting of children, volunteers, and adult residents all chatting peacefully together. For an instant the world was fair as it was, I thought.

The day before leaving LM Village, I had gone to the village market with the residents. I sat on the stairs of the church holding the mop I had bought myself to clean the toilet, waiting for them to finish their shopping. One of the Kurdish residents came out of the supermarket and sat by my side while waiting for the bus. We shared a chocolate bar and a chat about Greece and being in prison, videos from his mobile phone included. I still remember his face clearly, the way he talked about his past. Not complaining, without any drama, just telling as it was, even joking. I learnt from him what having been in prison really means.

One day Paul and I listened to Ragida, who was holding her pretty new born daughter Eleni in her arms, and telling us about the trip from Turkey to Greece and what they hoped for in life. They taught me the meaning of being brave, how to face life with your head held high.

A refugee camp is a place bustling with life. I can hardly imagine another place where life shows such resilience, where babies and puppies are being born day in, day out. There are children playing all over the place, you can see them smiling in so many different languages. People are as varied and as ordinary as anywhere else, but there is something special about them: they are young, strong, they have suffered, they have hope, and that makes them amazing kinds of human beings.

I cannot express how inspiring my experiences in Greece have been for me. I cannot even hope to count the huge number of lessons LM Village and Katsikas have taught me about life, nor recall all the names of the women, men and children, residents and volunteers I met, talked to, got to know and who will stay with me forever. I did, however, write down their names in order not to forget them. They will never suspect how much I owe them, how they made me grow up and restored my zest for life, las ganas de vivir.

When I returned home, I was no longer the same person and I will never be.

I want to mention just a couple of more things in closing. One is my love for Greece, a beautiful country I admire and which makes me feel at home. I have a great deal of admiration for Greek people because, as they have done before so many times throughout history, they are the first to embrace those who are fleeing from war.

And I want to say thanks to Dan for making come true my dream of driving a van.

A heartfelt thanks, to all of you.