Ragida is 24 and her daughter Elena was born last week by C-section in a Greek hospital. She is married to Moayyed, aged 28, and they have another son called Haji who is 1 year old.

They are from Raqqa where Moayyed was a stonemason and have been refugees for just over a year. The fighting and bombing was intense and getting worse so they had to leave when she was heavily pregnant with her son Haji.

They made the journey to Turkey in about 10 days and immediately crossed the Med in a dinghy with other refugees.

Ragida said she wanted to make the journey while pregnant because her baby would be safer inside her and she was afraid that he would die if she was holding him. She had Haji by C-section just 4 days after arriving on Lesbos Island.

That was a difficult time and Haji was not well so after 15 days they were transferred to Athens where they stayed in an apartment for 7 months. They liked it there because they were in the city and made friends but they had to share the apartment with another family and had no privacy. So they came to LM Village about 5 months ago. 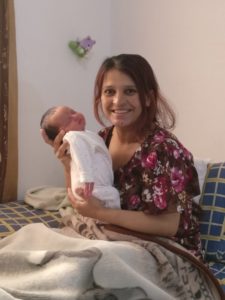 Because her first son was born by C-Section she was booked in to the local Greek hospital to have her daughter by Caesarian. That was a confusing and worrying time because she was there for 5 days and the doctors could not tell her when they were going to operate. After 3 days they fully prepped her for the operation and then postponed it for another 2 days. She is in pain following the operation but is not allowed to take painkillers and is unsure why that is. Despite all this confusion, she is doing well and Elena is healthy.

From the photos you can see what an adoring and caring mother Ragida is. We spoke to her in her home while she was resting in bed with her new baby sleeping in her lap. Her husband is very attentive and is not allowing her to do anything while she recovers from the birth.

They want to get their leave to remain so that Moayyed can get a job and earn a living. They think that is difficult in Greece because there is an economic crisis.