Return to Greece – 2 years on

I recently came back from my third stint volunteering at camps in Greece. In the more than two years since my first visit, it’s interesting to reflect on what’s changed, and what’s still the same.

The most obvious change is that Refugee Support are no longer active in Alexandreia, where I worked the first times I volunteered. Nor do they work at the few other camps they had expanded to. While I’m not party to the precise reasons for this, I know it’s at least partly to do with the camp at Katsikas – the one remaining camp where they have a full presence – almost doubling in size. This, coinciding with decreasing donations (a consequence of the refugee crisis dropping out of the news headlines), means being active at more camps isn’t viable.

On my last day a couple with a young baby, who had stayed at the camp briefly while on transit to another, arrived back, anticipating that we would be able to provide them with more nappies for their child. It was heartbreaking to have to tell them that we are only provided with enough to go around the one camp. “What shall we do?”, they asked. “I’m sorry – I don’t know. I’m sorry, ” was all I could reply. In the camps where RS used to be active no other organisation has stepped in to fill the role that RS used to fulfil. All across Greece there will be parents in a similar situation, unable to provide the basics for their children.

It is however heartening to see how much the shop concept has evolved from the early days. Back then, us volunteers would race against time to bag enough rice and vegetables ready for however many families were due to shop. Then, more or less, we would do a headcount and dole out that week’s rations. Nowadays it really feels like a proper shop, with touch screen-tills, scales, shop assistants demonstrating a poor grasp of arithmetic and – it’s difficult to convey how special this detail is – the ability for shoppers to keep their change and save it for another day.

The monthly allowance for refugees in Greece isn’t much (150 euro or thereabouts), and Greek supermarkets aren’t as cheap as you might expect. So having this extra ‘disposable income’, and reliable access to good, healthy food makes a real impact on physical wellbeing. Children were sent by parents with RS tokens to pick up a few things from the shop towards the end of the day, just like any normal family would. On one day, a shopper returned to the shop a little panicked, having forgotten to pick up an essential ingredient for what she was cooking. When I told her it was fine to exchange she let out a very relieved, “God bless Refugee Support”. A little, heartwarming taste of the dignity and normality that RS provide.

I was only in Katsikas for 2 weeks, which is not very long to get a full impression, but it did seem less tense than Alexandreia. At Alexandreia the RS approach was still in its infancy, and there was still lots of experimentation and lessons to be learned. There was also an ambitious range of work being undertaken, including running a Women’s social centre, setting up a camp kitchen, language classes and many other things besides. Many of the residents had got as far as the Macedonian border just a few months earlier, and, having been turned back, were frustrated, robbed of the passage to Germany they had almost achieved.

From where I was stood (not very close to the decisions most of the time, it has to be said) it looked like a very frustrating balancing act, and the atmosphere was often tense, with periodic disputes between different ethnic groups on camp, and between the organisations working there and the residents. There wasn’t much evidence of this at Katsikas, which probably has many causes, but RS have definitely become a more well-oiled aid delivery machine, providing stability to people’s daily lives, which can only help matters. Now that the RS model has matured, it’s such a shame that the opportunity to go back to other camps isn’t open at present.

I’ll end with one final, sad observation, of something that hasn’t changed; there are still thousands of refugees in Greece. Living in temporary accommodation, with temporary legal status, subject to an uncertain Asylum process, hundreds – or thousands – of miles away from homes they may never be able to return to. And while they live in Greece, there is such a waste of lives.

I will tell you about 5 people who exemplify this waste. A former literature student who hasn’t written anything for 5 or 6 years. A business & management student who was also unable to complete his studies. A boy who liked to practice his maths in the shop. A girl who was constantly drawing mischievous drawings on the walls; a young Frida Kahlo, if ever I saw one. And a boy who would arrive outside the shop every few days, build some Rube Goldberg contraption out of whatever was lying around, before taking his crazy young inventor mind elsewhere. All of these children attending school – if at all – for only a short time each day, mainly to learn Greek. The young adults unable to study, and with very limited opportunities to work.

These people are not a burden – we should feel lucky to have them here – but unfortunately that is how they are still treated. Before heading to Greece, and after arriving back, several people expressed surprise that there was still an issue with refugees. It’s as difficult as ever to talk about my experiences as a volunteer (not that it’s harrowing, but it is somehow very difficult to relate), but I will try to, because all these people arriving on Europe’s shores deserve so much more than to be forgotten. 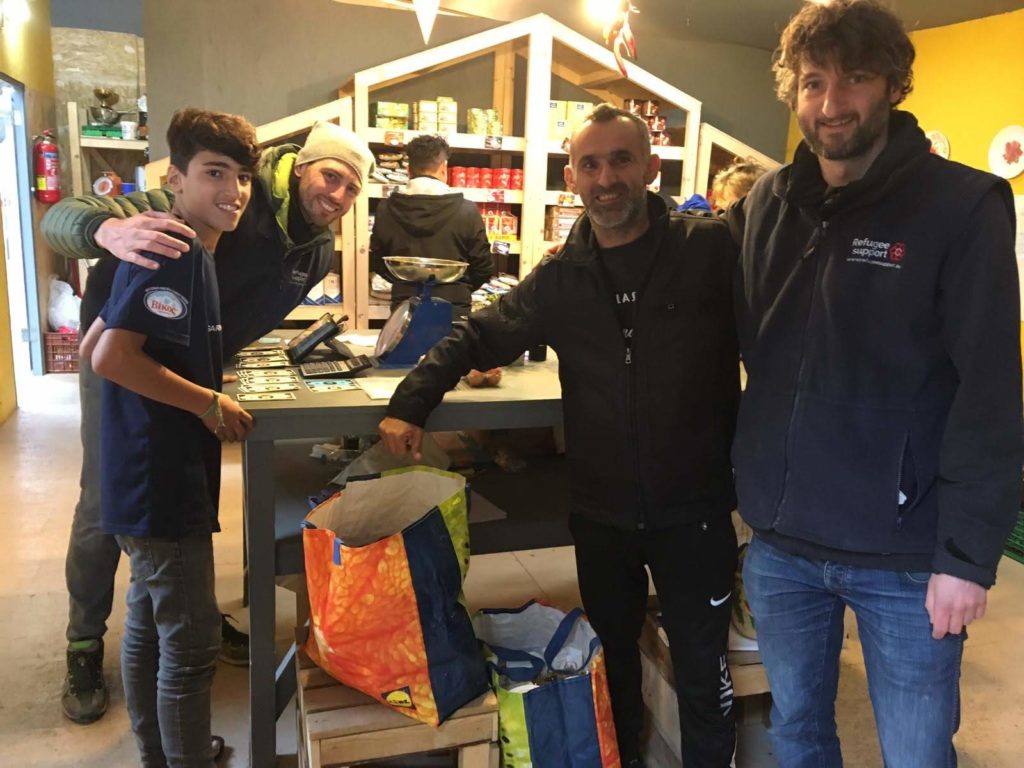