This was our first camp in Greece, where we started operations in April 2016 with a free shop and everything we have done since has grown from here until we left in June 2017. 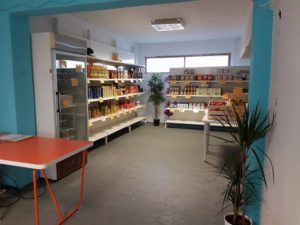 We converted one of the buildings to a free shop where we offered a regular basket of goods to each family twice a week for about 6 months but then switched to a points system that we had pioneered in Filippiada. This was a huge leap in dignity by taking control away from us and into the hands of the refugees and made life a little more normal for those on the camp. 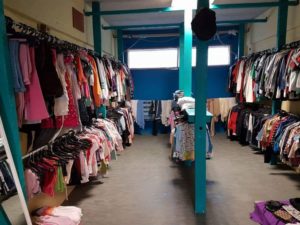 We had one room for the clothes boutique which ran on a weekly schedule of one week children, one week women, one week men. This started as a dirty room full of bags of clothes and has steadily developed into a welcoming space, nicely decorated with a changing room, mirrors and clothes presented on rails. Most of the clothes we distributed are used so we also had a sewing machine lending system so they could make and tailor their own. 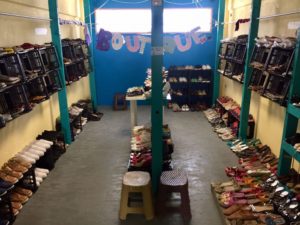 The changing schedule meant the boutique needed to be broken down and re-stocked every week for the next group of refugees. Shoes were distributed about once a month and then it became a shoe-tique.

We also had a large off-site warehouse for receiving and sorting deliveries – including container loads.

Fruit, salads and shop items all helped but we fully renovated a derelict kitchen and opened on Christmas Day 2016. This was particularly important when the state stopped providing food. There were chefs on the camp and by working together we provided at least one hot meal a day to every refugee on camp 6 days a week so that everyone could benefit from daily nutritious food. 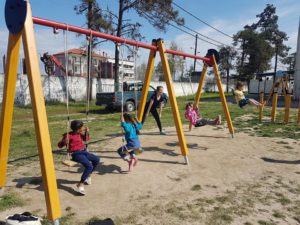 Other agencies had the responsibility for structured activities for the kids so we coordinated with them to run supplementary activities. We built a high quality playground for the children with 6 swings, 4 rockers, 2 see-saws, a climbing frame and a trim-trail.

Structured education is the responsibility of the Greek Ministry of Education. It was struggling to provide places for all the refugee children so in September we built 2 classrooms on-site for them to teach the 4-6 year old children while the older children attended the local schools. 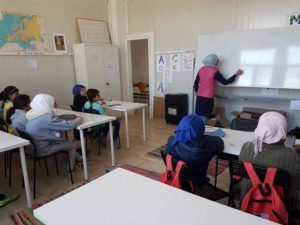 We organised language classes in English, German and Greek in co-operation with the NRC and taught about 250 students. These rooms have now been taken over by other agencies and groups on the camp for education.

The classrooms also made the ideal home for a library where every book was catalogued and could be borrowed for up to 2 weeks. 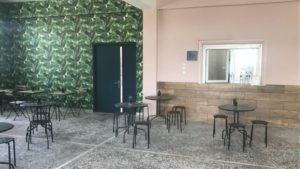 Many refugees had been in the camp for over a year while they have waited for their asylum applications to be processed. We renovated one of the large rooms on the site with windows, doors, tea bar, television and two rooms for actvitiies. The cafeteria was refugee-run and we just provided them the materials they need to have some leisure time.

The medical NGO St Elizabeth University in Slovakia manages all health and dental needs on the camp and we did what we could to support them. We funded the tiled flooring in two rooms so they could run suitable medical facilities. 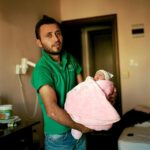 From July 2016 we arranged for all new mothers and their babies to stay in local accommodation. Some of them stayed for 3 days, one stayed for over a month, while they recovered from the birth.