I was in the library, and I really should not have been on Facebook. But, in the midst of procrastination, a notification popped up on my sidebar. “Thanks to a stay of execution at Katsikas camp, we need short-term volunteers from mid-April to June”. Against all my better judgments, my mind was made up from that moment. Flights booked a few days later, after breaking the news to my parents that I would go back to Greece again for the holidays. “Again, really?”. Yes, again indeed.

This time around in the hangar of wonder, it was all being switched up. Previously, the core focus of the work in Katsikas was around the mini market and the provision of food. And from 10:30 till 1pm, it still did just that. With that, a return of many of the same faces that I had seen before.

On my first day, back last September, another volunteer had, whilst giving me a quick introduction to the hangar, warned “there is a little girl who is always here and she’s a bit of troublemaker, make sure she stays out”. First in the door again, almost like clockwork, she walks in. She has kept her mischievous smile, but as the months have gone by, she is so much more calm and attentive than on our first meeting. I keep trying to teach her my name. “Bella” I say, “Paula” she responds. Bella “Paula” again. For the first week, we keep trying. Bella, Paula, Bella, Paula. It’s hard to be frustrated with her as, in all likelihood, I have definitely said her’s wrong many a time and butchered her lovely Arabic name. Two weeks later, I give up. I let her call me Paula.

The familiar faces continued to roll in. The men meander in for their morning coffee, sitting in the waiting area, always looking for a chat and nodding their heads in thanks to everyone on departure. One sticks out in particular; to call him just a lovely man is a sincere understatement. His smile is infectious, even through the time and distance that now separates me from him. Good morning, he said, walking in with two of his children in tow. His small boy is periodically charging round the hall with his own buggy, tiny little legs stamping. His youngest, around one, in his arms with a smile like his father’s; shrunken but still beautiful. They beam to each other. 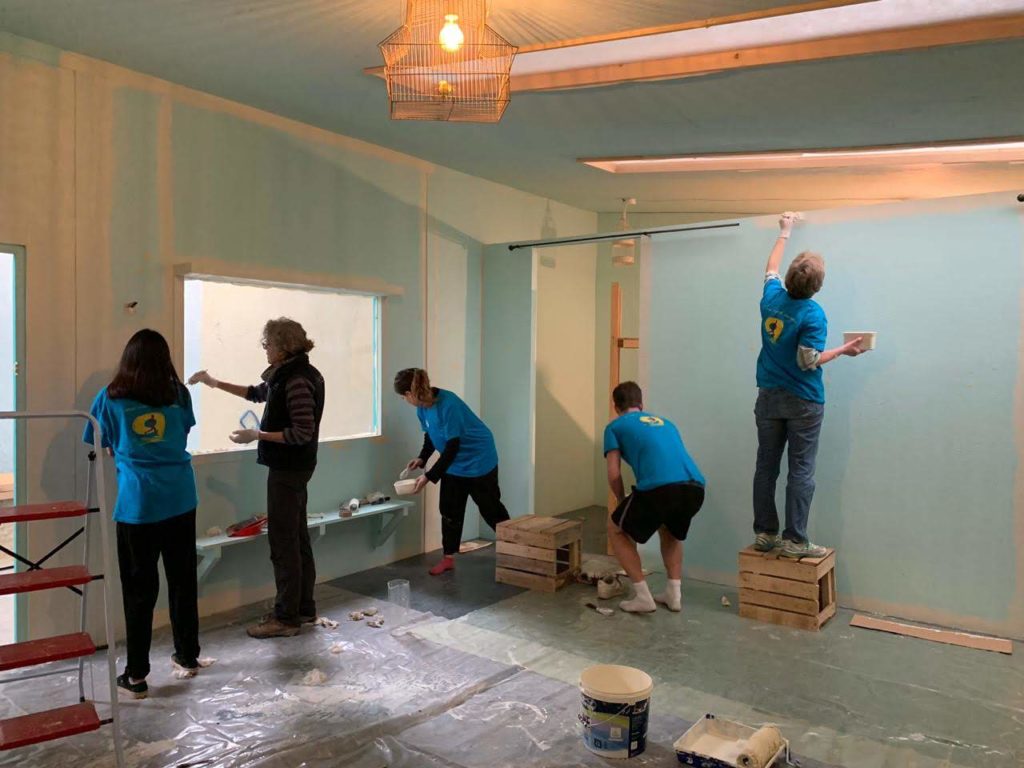 Alongside the familiar, old rooms being transformed. The shop had moved to the back of the hangar, to a smaller but freshly painted space, what had been the shoe shop. After a few mornings of confusion, indirect pointing and a couple gentle pushes, everyone settled in. New shop, same old dilemmas and trade offs. Juice boxes or biscuits. Bananas or yoghurt. The nail-biting continues.

With it, came a new woman’s room. The women, like everyone else on camp, have their struggles: they are expected to fulfil their traditional roles, yet lack proper resources. As a result, they prioritise the needs of their children and husbands, often to the detriment of their own well-being, ending up spending large parts of the day inside. So having a space, just for them, is so important. An Afghani lady took it under her wing with delight. She pops her head every afternoon to check in on how it is progressing. Have you got the paint? Right paint colour? Is it drying okay? After having finished painting the room one Friday, she turns to us and asks, so “who is teaching the English class to us on Monday?” I had once attempted to teach English to a small French child, and even though that didn’t go so well (he frequently bit me), I thought I could give it another shot, hopefully to better reception this time. Monday afternoon, came along, and slowly but surely 21 Afghani ladies packed into the new baby blue room to learn the ABCs.

And they loved it. They ask many questions. “How do I ask for this?”, “what is that?”, “where can I use this?” And in between, they smile, giggle and shush each other like schoolgirls. By Wednesday, they were asking for two more classes in the morning. one for complete beginners and ones. By the Friday, they were in their using the room without any volunteers, running their own classes in the morning. Each time, more would come along, filling the room with stools and benches. It was really quite wonderful.

On the ferry to Corfu, I befriended an elderly Greek lady with whom I shared a lovely, albeit unromantic, sunset. She had kindly watched my bags as I dashed to the loo and gifted me with some lovely breadsticks upon my return. My experience of Greece, as lovely as it has been, however is undoubtedly is shaped by the fact I am young, white and female. Many of the young men living on camp are around my age, in their early twenties.

Yet their experience of crossing a border, is a world away from this. The ease at which I have been able to return to Katsikas, despite the immense pleasure of the experience, fills me with a sense of discomfort, as those familiar faces are waiting to do just the opposite. The ability to book flights in minutes, and go anywhere within days, is one I wholly took for granted. I spent a big part of my childhood, flying to Malta multiple times a year to see the half of my family that live there. Many residents are waiting much longer for their own family reunions – many speak of the brothers, sisters, wives, husbands, and children they have in Europe beyond the Greek borders.

This comes against of ever-increasingly hostility within Europe. Instead of workable solutions, politics and politicians seem intent on further protracting the crisis, playing into the hands of the rising far-right across Europe. In the words of Guy Verfostadt, “we need to better protect our external borders to keep our internal EU borders open.” Keeping people out, without regard for the consequences. The European Commissioner for Migration has expanded Frontex’s mandate, now legally able to turn migrants away at the border. And those who manage to make it, are now waiting even longer in this limbo; a recent arrival in Thessaloniki reportedly was given an interview date in 2023. Inhumane puts it lightly; it is neither a right nor reasonable treatment of people who have been forced to flee their own homes.

These stories are absent from the airwaves of our radio and pages of national newspapers. Only the clashes at Diavata have reached our headlines in 2019; there has been little coverage of events in Libya, where migrants and refugees have lost their lives in detention. They tried to reach Europe, and were turned back, only to be trapped again in the crossfires of war in Libya. In late April, armed fighters entered a detention centre just outside Tripoli and opened fire on the defenceless people inside; 376 people have died in the conflict, and many more remain trapped – one third of those are children. Despite the conflict, days later, the EU funded Libyan coastguard continued its interception of boats trying to reach European shores; 116 people were ‘rescued’ to be returned to the detention centres.

I think a lot about what will happen to the kids, where their lives will take them once they leave this place. We hear stories and TED talks from the inspirational kids grown up; the model, the athlete, showing how against all the odds, they made it. Will this be them – the two Afghani girls, never seen apart, glued to the hip; the little girl with the beautiful smile, pushed around in her buggy by her sister, insistent on never wearing shoes; the restless young boys chasing the cows and bringing down two telephone boxes on their journey; the Syrian girl who would much rather hang with the puppies than the kids; another, who can replicate a bark exactly like one (honestly).

We forget the psychological damage of this kind of purgatory. This waiting space, in which you can never go back to your old life, but haven’t been told yet what your new one will be. But that is why this work is so important; to make it as normal as possible and thereby create a space where they can build, grow and learn rather than be defined by the trauma they have left behind.

If you had told me a year ago, that a tiny village in Northern Greece would change my life, I would have, frankly, laughed. I applied on a whim, in a blue funk, bored and broke in my summer holidays. But, today, sitting in the library one day after leaving for the final time, Katsikas is stuck to me. It is undeniably strange to gain to so much from an experience of giving back, and I have come away from each trip, with many a lesson learned. From ordinary people, showing warmth, kindness and courage in the face of extraordinary circumstances.

Working at Katsikas has been the greatest privilege, and a big part of that is thanks to the incredible bunch I worked alongside; to Molly, Lucy, Leti, Francesca, Brigit, Lea, Max, Cathie, Al, Emma, Jenny, and Dan. I cannot recall the names of all the residents whom I met, exchanged smiles and words with. Yet they stay forever with me, and I owe them the world and more. I only hope for them the lives that they deserve, ones that they can choose rather than one constrained and defined by politics. To live and work where they desire, with a chance to start life again but somewhere new. Thank you is not enough. 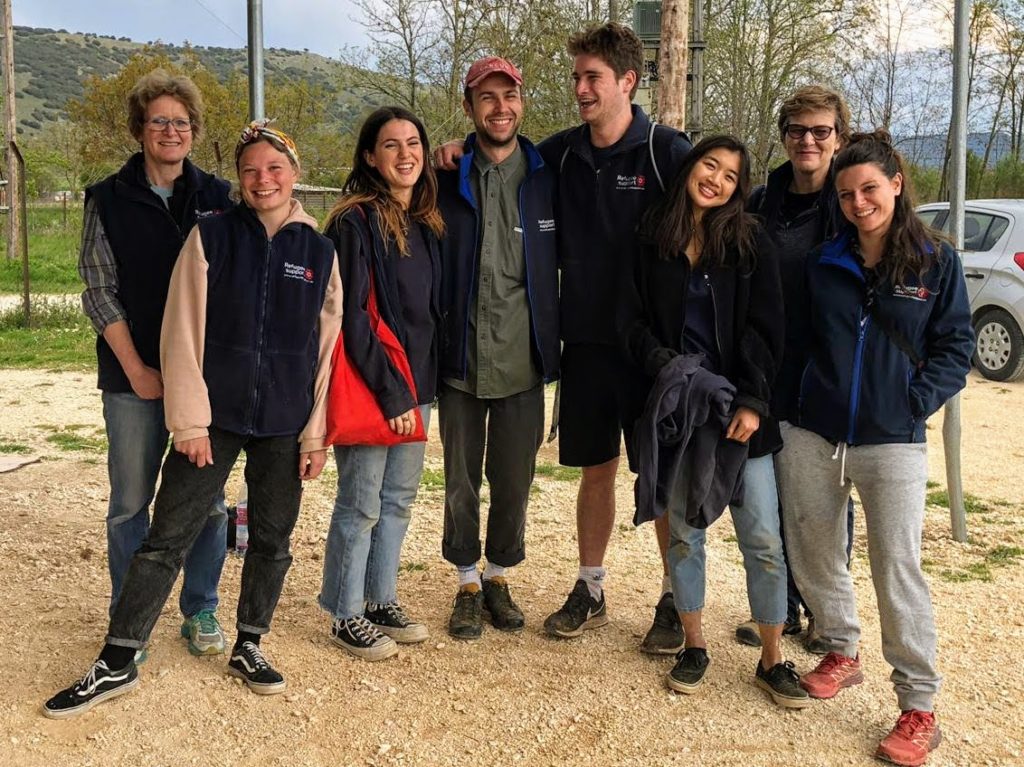