The Team HELP REFUGEES IN TIJUANA

Our co-founders, John and Paul, are currently in Tjuana to show solidarity for those refugees fleeing violence, poverty and climate change. They arrived on Sunday and got straight to work on Monday.

They’ve been joined on their journey so far by some friends and expect to be joined by some more over the coming week.

But there’s lots that you can do from afar to help migrants travelling Honduran caravan and refugees in Tijuana. We estimate that it’s going to cost £350 a night to feed the 500 residents at the camp we are currently supporting. Please help us by making a donation today.

Check out Paul and John’s thoughts about their journey so far:

John:
We’ve just arrived in Tijuana and went with our local friend Moisés Godinez to the border camp to meet some of the 1,000 Hondurans still there. They have been removed from the overcrowded/ insanitary stadium and are now camping on the street outside with no toilets, food, or medical provision.

About 4,000 Hondurans have gone to a camp about 15 miles away where support from the state is much better. But the 1,000 remaining don’t want to go because they cannot afford to travel into the city (some are working locally, some are applying for refugee status in Mexico and need to sign papers/ have interviews) or because they hope that being by the wall the US will change its policy towards them. It will not.

I spoke to one woman who has a job in a central hotel, but has not been paid yet, so was setting up her bed for the night on the pavement with her 2 children. Her daughter was 12 years old. They were going to be sleeping on blankets with no tent.

I spoke to 28 year old farmer from Copan who had left because he could not provide for his widowed mother, his wife and their 3 year old son. Even after working all day on plantations for $3 a day, growing his own maize, beans and coffee, cutting his own firewood, the family was still hungry.

He talked tearfully for a long time about the violence, criminality and injustice in Mexico. He said as risky as the journey had been, and as difficult as life was now, it was better than life in Honduras where they faced certain death. He is currently applying for a residence permit in Mexico so he can work and send money back to his mother, wife and son.

Tomorrow we visit the new camp and think more about what we can do to help. We will do our needs assessment over the next couple of days to ensure money is targeted to where it is most needed.

John following a visit to a squat the same evening:
We made it to one of the unofficial squats this evening. I don’t know why I still continue to be shocked when I first visit a new refugee camp. I can’t even describe at this stage the conditions these families are living in.

Most are living under some form of shelter. But as I was leaving, I saw a mother and her two children bedding down for the night on two mattresses in the open. The temperature at that stage was 10° c and getting colder.

There is so much needed: basics such as food, warm clothes, blankets, sleeping bags, and basic hygiene kits.

This time last year, we were in Bangladesh trying to help the Rohingya.

Today, we are in Mexico trying to help the Hondurian Refugees.

It’s the same thing: people living in terrible conditions while the world watches.

Where will I be this time next year?

We started today by visiting the official camp where about 2,500 Refugees currently reside. The majority are living in tents or makeshift shelters. There are 2 indoor sections designed for families, but they are not large enough to accommodate all the families on camp.

The army are providing food 3 times a day, and UNICEF and Save the Children are setting up on camp. Although conditions are very bad, but at least they receive food and have sanitation.

We have decided our resources would be better spent at the squatter camp that we visited last night where they have nothing, so tomorrow, we are going to work on a plan to distribute food.

Today we met Marco from San Pedro Sula in Honduras.

Marco had a good life working in the merchant navy and sending money back to his wife to provide for their daughters, until his oldest daughter innocently got tangled up in some gangland turf dispute on her way to school.

Marco left his job and returned to Honduras to plead with the gangland boss that he keep his daughter out of any gang business but was told: “You and your family belong to me. You will do as I say or I will kill you and your daughter.”

Fearing for her life, Marco decided to move with his family to a remote village in the mountains. While he was moving out, the gang tried to kill him.

He was shot in the leg and the bullet is still lodged there. He showed me the scar. He and his family cannot go back to the city.

Now he is sleeping on the street in Tijuana looking for a way to get to Canada because he knows he can work there and send money back to his family.

He is not an invader.

John:
It is 7am now in Tijuana and it is going to be a very long day but an exciting one. I can’t believe that after only 3 full days we are going to be springing into action.

We are nearly ready to start serving hot food to 500 people in desperate need. Our friend, Moises, found us a good kitchen at his church that we can use to cook 500 meals. He also knows some other local people who can help and volunteer, and Siobhan O’Loughlin is joining us tomorrow so we have a team.

Tomorrow, we are going to start distributing fresh fruit to the 500. This will allow us to bond as a team and work on a system before doing the more difficult task of serving 500 hot meals.

We estimate it will cost us about £350 a night to feed everyone.

Rain, cold but some very grateful refugees so a BIG thank you to our donors who made it possible for us to do our first distribution.

Tonight we distributed fresh fruit to 500 people. It was raining hard and very cold but so great was the need people were happy to get wet for the fruit. I say that with such great sadness that I have to see that just 300 meters from the US border. The needs here are so great. Hopefully the weather will clear to allow us to do hot food tomorrow it would make these people so happy. I must have heard 500 “gracias” tonight each one said with true meaning.

Thank you to our donors and the 6 volunteers we had to help. 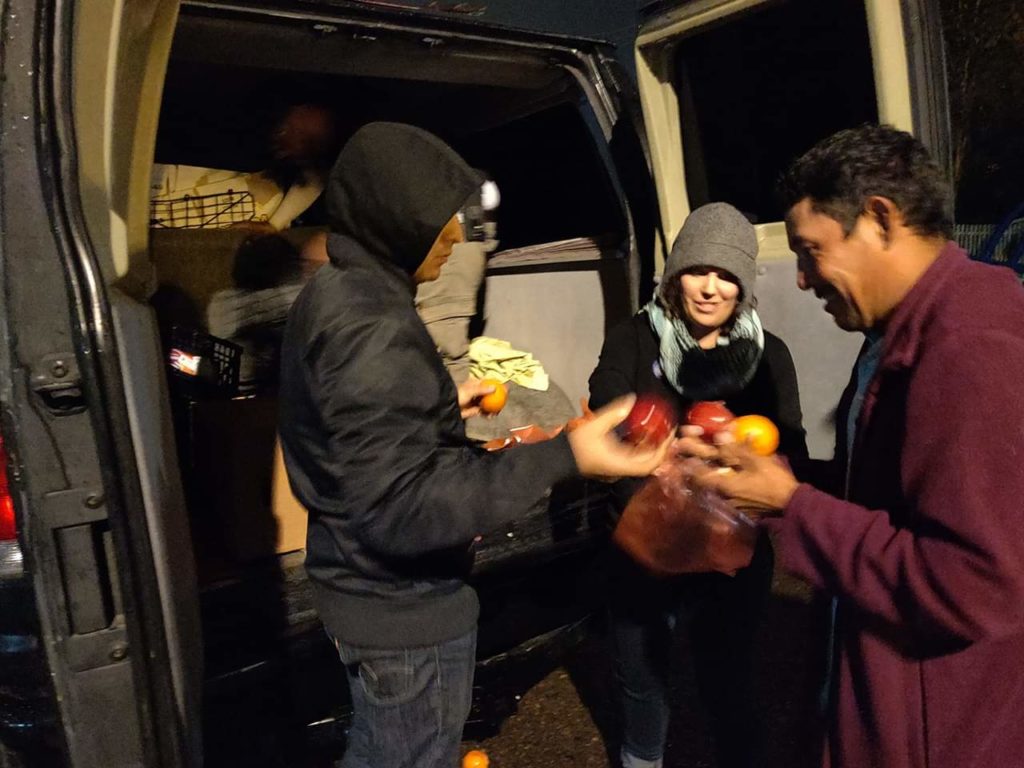 Thank you for reading, and we’ll see you next week.
Please contact us today at info@refugeesupport.eu if you’d like to help refugees in Tijuana.
Refugee Support