Why help in Tijuana?

In October 2018, we closely followed the journey of the migrant caravan from Honduras to the US. US mid-term elections were approaching and the people making that journey were being unjustly demonised. Our friend and photojournalist Sean Hawkey had also been travelling with the caravan for a month. We spoke to him in one of our podcasts and we determined to help. We wanted to achieve two things: 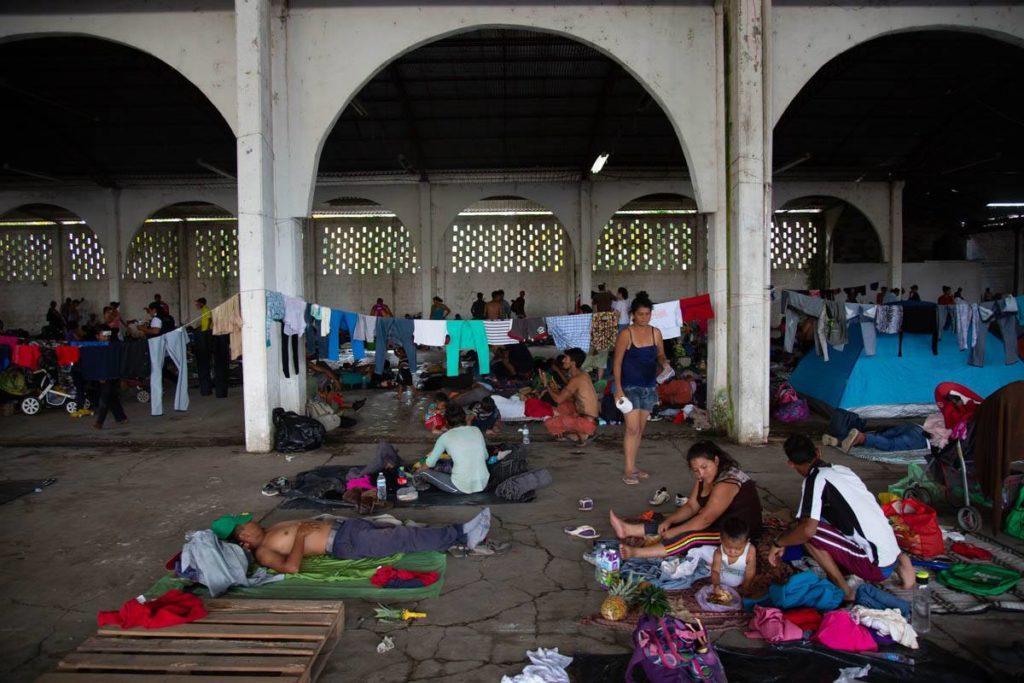 “Recognition of the inherent dignity and of the equal and inalienable rights of all members of the human family is the foundation of freedom, justice and peace in the world”

In Central America, the combination of climate change, extreme poverty, shocking violence and a criminal political elite drove them to flee. They have no freedom, justice or peace. They are refugees seeking a future. And they are #NotAnInvasion.

This is what drove us to help. We all need to do more for people who have run out of options and are looking for a better life. We should all have that right. And we should all be allowed to live in dignity. 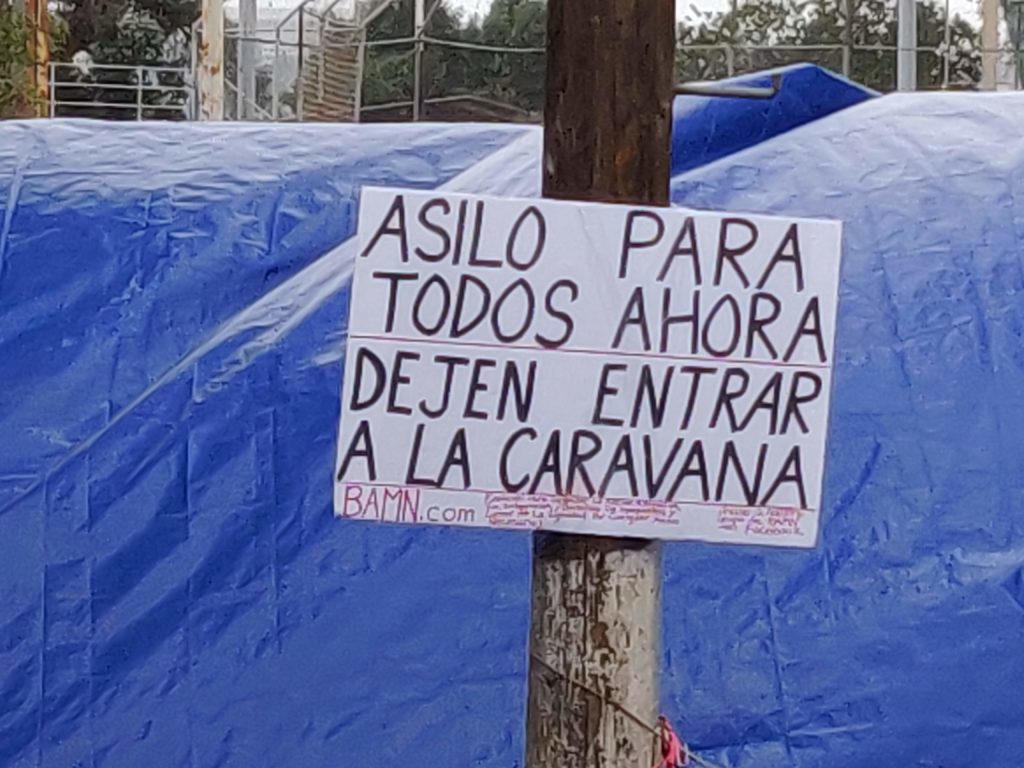 Most important of all, we put dignity at the heart of everything we did and practically demonstrated to people who have had to leave their country that they are not alone and that people care. 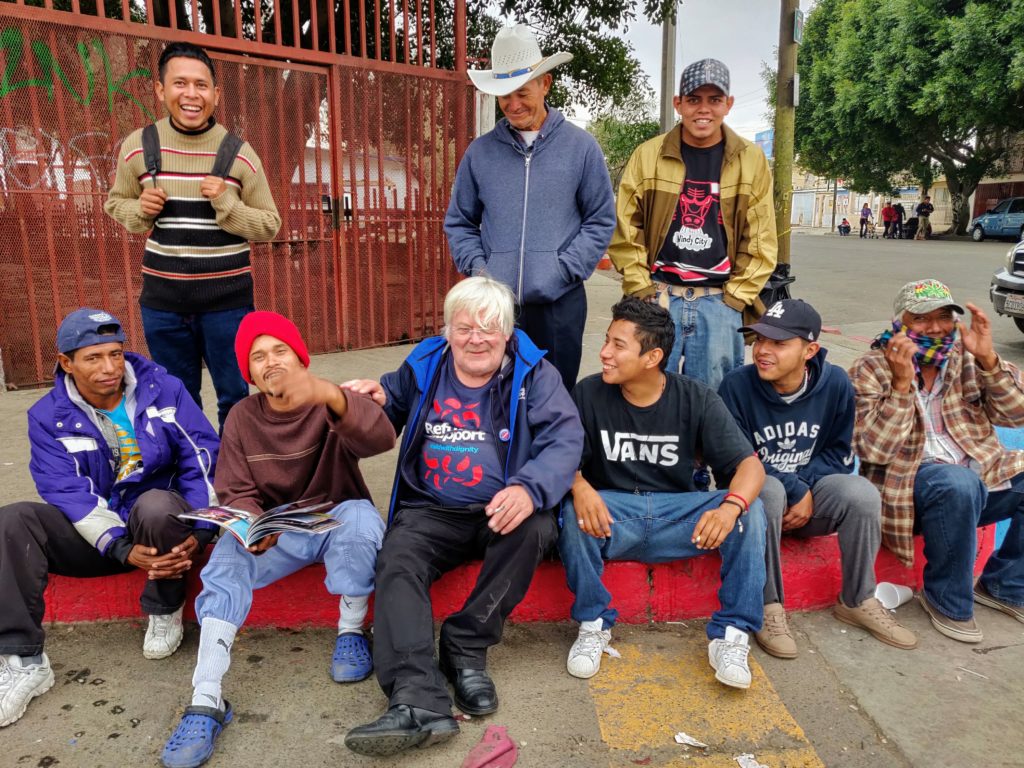 We started with a needs assessment

When the caravan of about 4,000-5,000 arrived at Tijuana at the end of November they set up camp in the Benito Juarez sports stadium in the Zona Norte right next to the US border.

By the time we arrived on 2 December, everyone had been removed from the overcrowded and insanitary stadium. They had settled in two camps – one official camp on the outskirts of the city (El Barretal) and one unofficial squatter camp right outside the sports stadium (Zona Norte). Both had huge problems.

When we visited there were about 2500 people living on top of one another. The Mexican state, army, Unicef, Save the Children and other agencies were setting up. It was about 15 miles from the border in the outskirts of the city. There were two large halls full of people in addition to a patio with tents. It was crowded.  Helping there would have probably duplicated efforts and we’d have inevitably got tangled up with coordination activities. 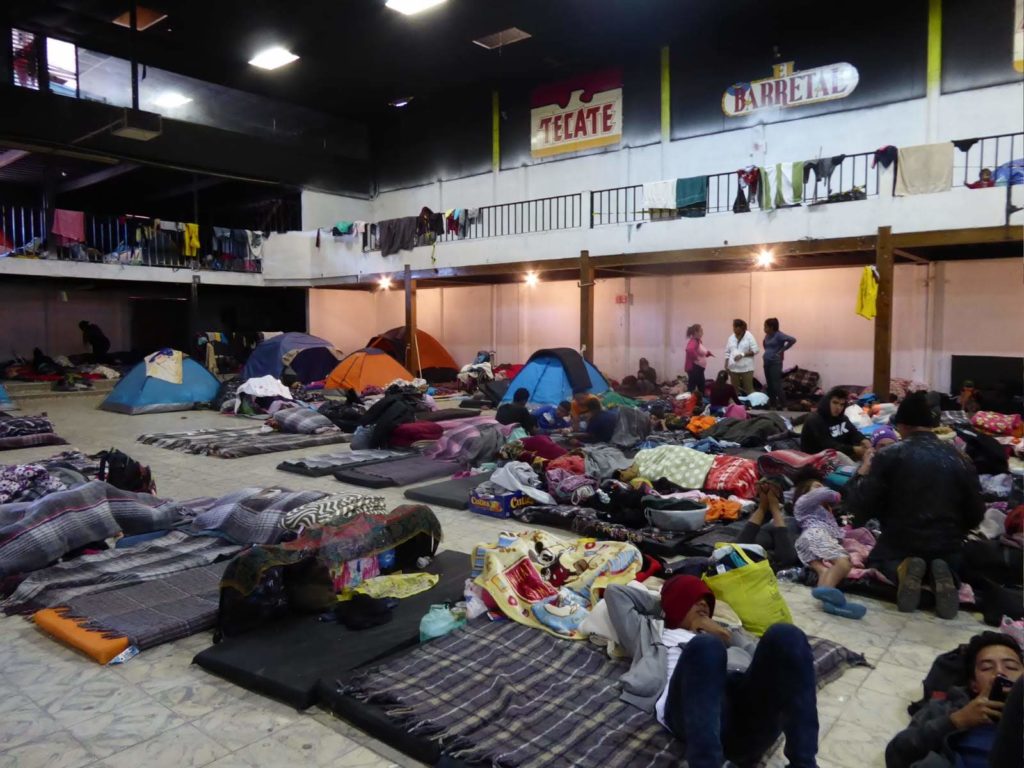 Since our visit, numbers have increased and the camp authorities have now severely restricted opportunities for organisations like ours to help.

About 700 people, who decided not to go to El Barretal camp, set up a camp immediately outside camping in tents on the street outside. Although there were large numbers of young men, there were many families and young children. As part of a deliberate (unsuccessful) state policy to force people to go to the official camp, this camp was denied toilets, running water, food and medical provision. 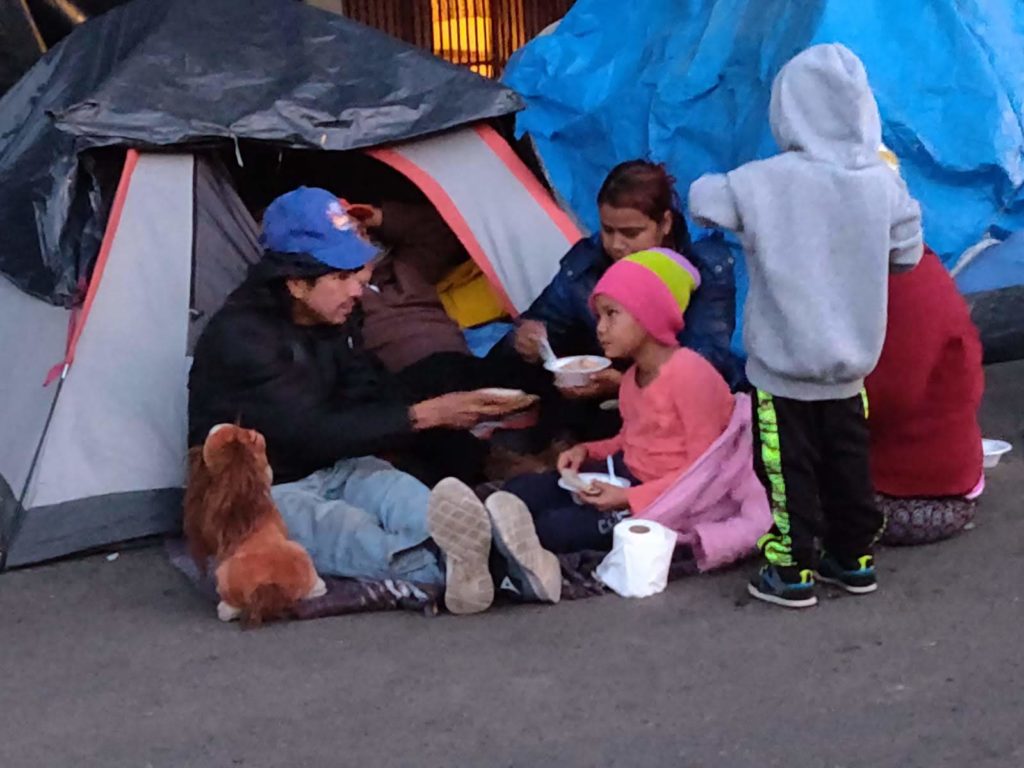 Although conditions were harsh, they still  preferred to stay in the squatter camp because:

Given the support already available at the official El Barretal camp, we decided to focus on food for the unofficial squat at Zona Norte where there was a lack of any services.

What did we offer?

We started the first day with a distribution of fresh fruit to 500 people. This was to allow us to bond as a team and work on a system before doing the more difficult task of serving 500 hot meals. We had to negotiate with the police for some time to get permission. It was cold and very wet.

We then continued to offer hot meals every day for the next eight days. Meals were varied but all contained a lot of fresh vegetables, rice or pasta, and either chicken, beef or beans. We also offered a piece of fruit and drinking water.

On our last day, we distributed a bumper fruit pack of 4,000 grade A apples, bananas and mandarins together with 400 litre bottles of water.

Shops were charging 5 pesos (about 25 cents/ 20 pence) to use their toilet so we paid one to keep it cleaned and open from 10am to 10pm every day we were there. 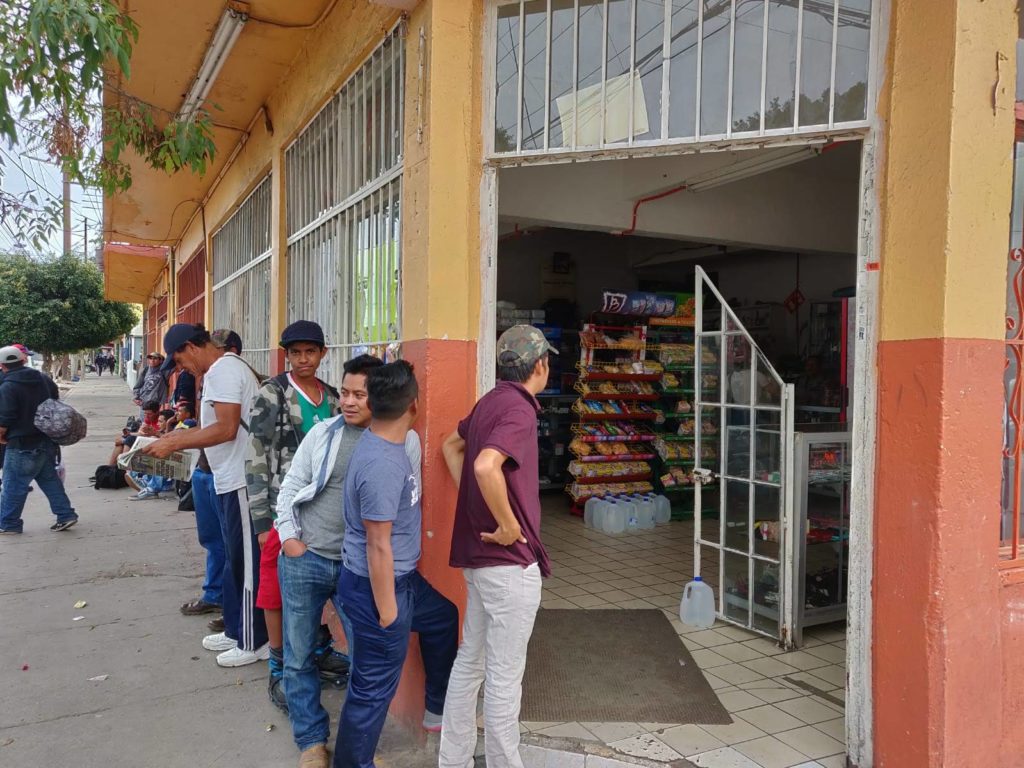 We made a policy of buying everything from small local businesses.

Finding the Helpers and working together as a team

From the moment we arrived, local resident Moises Godinez dedicated himself to supporting us and introduced us to his Church where his father Enrique was Pastor. They had a large communal kitchen that became the hub of our activity. 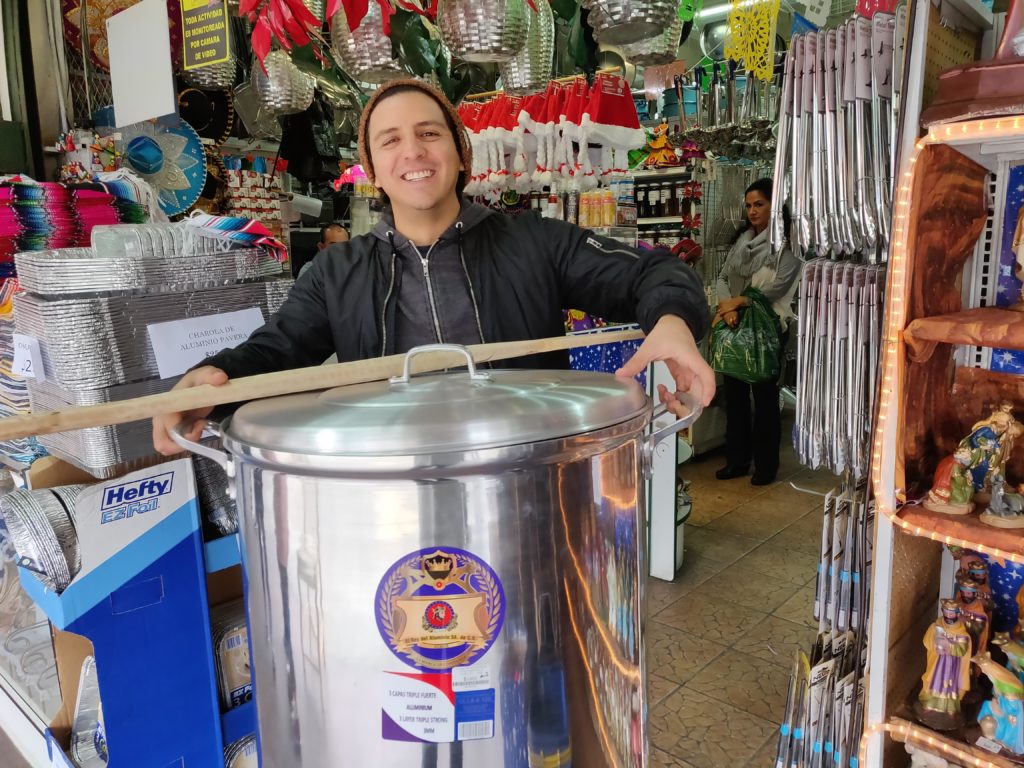 The church was already offering accommodation to Salvadorean and Haitian refugees. They also threw themselves into helping together with other members of the church community and their local contacts. They sourced great ingredients, came up with the recipes, prepared the food, laid on transport and helped to serve.

We were also joined by Honduran and US humanitarian workers who brought their own essentials to distribute. Together with Siobhan O’Loughlin, Brandon Neill, Mary Allen, Shannon Ongaro, Paul Hutchings and John Sloan from the Refugee Support Europe volunteer family, this was a true international effort. 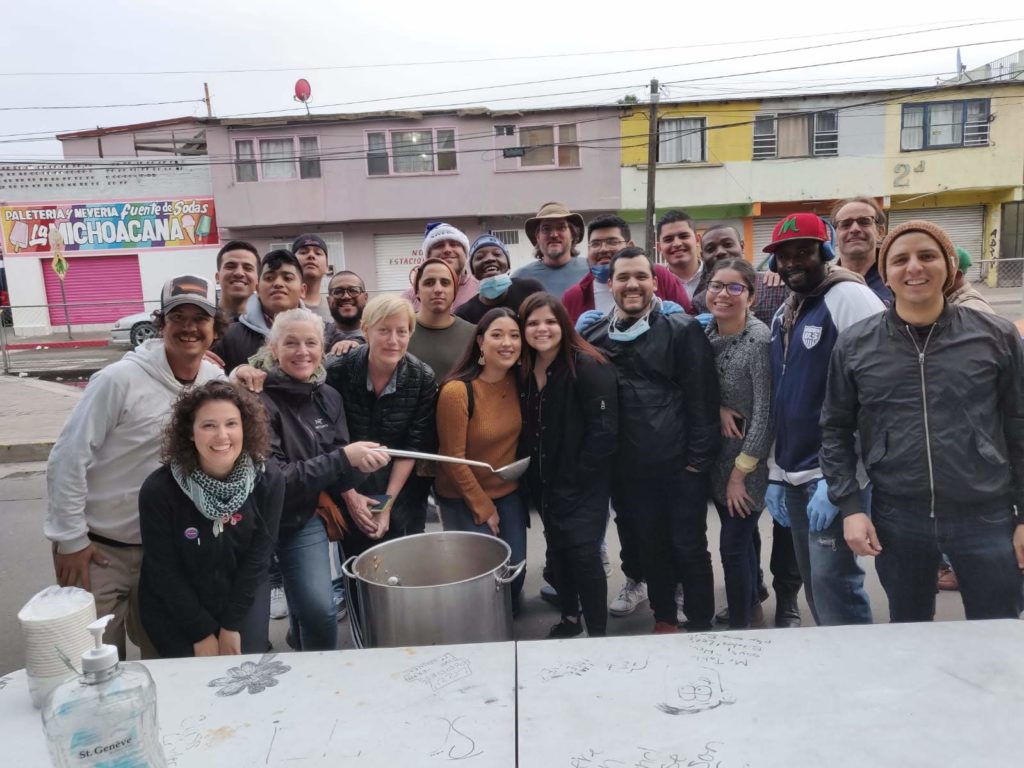 We spent a lot of time listening to their stories

We spoke to many people and their overwhelming desire was to provide for their families. What they had in common was the impossible burden of trying to live where murder is normal, justice is rare, work is scarce and wages do not cover basic living. Central American states are failing to protect their people.

We spoke to a 28 man who was a farmer in Copan and left because he could not provide for his widowed mother, his wife and their 3 year old son. He talked tearfully for a long time about the violence, criminality and injustice there. But added to that, even working all day on plantations for $3 a day, growing his own maize, beans and coffee, cutting his own firewood, the family was still hungry. He said he faced certain death in Honduras. He is applying for a residence permit in Mexico so he can work and send money back to his mother, wife and son.

Another, a qualified electrician left because no-one had money to pay for his services. He left his wife and 4 of his children behind in Honduras but brought his oldest child with him – his 17 year old daughter – because she stood the best chance of being able to cross the border with him. When they do that, he will send money back to support his family in Honduras.

The journey was tough. We spoke to one Honduran who is a semi-qualified doctor and joined partly to support the caravan with medical care but also because he deserted from the Honduran navy after orders to shoot on his own people. He said that he had to attend to 3 people who died en route falling off vehicles or being knocked down.

One man in his late 30s described how he was part of a group trying to walk into the US but was rounded up by a gang before crossing the Mexican border. They were all held hostage but when no payment came they were tortured and massacred. He was shot but escaped. This gang then murdered his 20 year old son in Tegucigalpa as punishment and warned that if he returned they would kill him as well. He cannot return and he is fearful in Mexico.

There were unaccompanied children. We spoke to a 13 year old Salvadorian girl who was there with her 19 year old male cousin and waiting for her 15 year old sister to arrive. When she did arrive, the cousin left and the two girls were left to fend for themselves in the squatter camp. They either had no parents or had run away from them. We tried hard to get them into UN protection but days later, they were still on the streets. 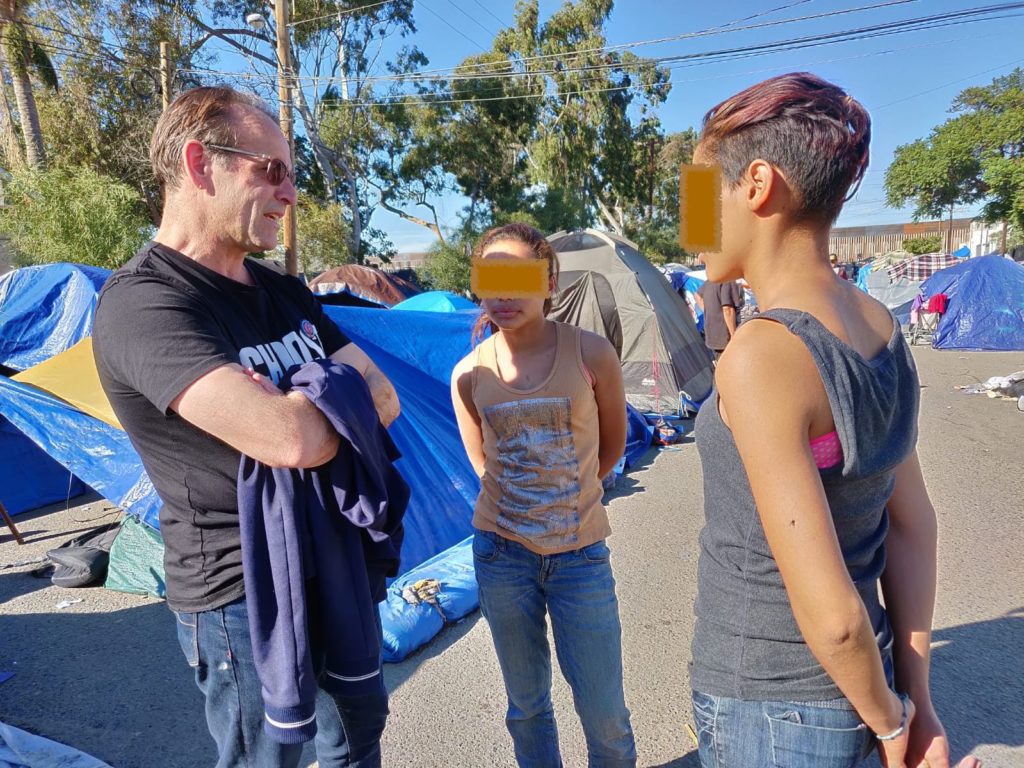 We found another 15 year old boy who was there with his 21 year old friend and they had no idea what their legal options were. They just wanted to get to the US to earn some money.

We have published a handful of other stories here, here and here.

This is just a sample. We spoke to many people who had been watching their children starve, been threatened with extreme violence and seen their friends and family shot dead. One child matter of factly related how his grandmother had been shot in the head right in front of him.

They need a chance to rebuild their lives in peace and dignity with justice and opportunities.

As with all humanitarian crises, the needs are changing. The longer we were there, the more people we saw arriving to provide food both from Mexico and from across the border in California.

But Tijuana has many refugees and asylum seekers and that is always likely to be the case. We will be taking some time to review our experience and see what we can do to help in 2019.

We have to thank all those donors who helped us to help. Thank you – together we made a difference. 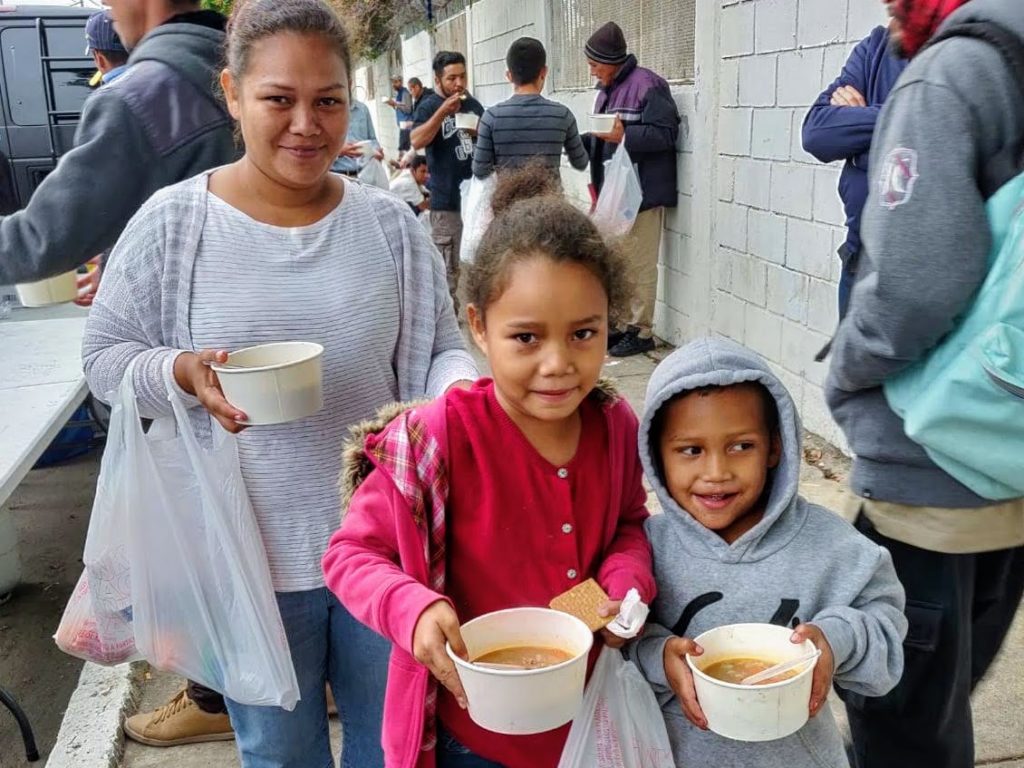