From Office Manager to Coordinator

I’m Hannah and in May, I started as Office Manager becoming the latest member of the Refugee Support Europe family. Then in August, I was delighted to spend 7 weeks as Coordinator at the Chisinau Dignity Centre in Moldova.

On arrival, I worked closely with Coordinator Summer. She took me under her wing and spent a week training me to take the reins. What immediately struck me was Summer’s dedication to maintaining immaculate standards and compassion for refugee rights and creating an environment centred on dignity.

I soon realised I had big shoes to fill, but Summer was an exceptional teacher, quickly equipping me with her advice and expertise, with lots of laughs along the way. It was a pleasure to have worked alongside her, a true role model.

Having worked at both Ioannina and Nicosia Dignity Centres for short periods I was already aware of how the Dignity Markets are a great model for distributing aid in a humanising manner, offering shoppers both choice and agency.

Chisinau was no exception. It was great to see how the centre in Moldova had been tailored to meet the needs of the Ukrainian population, stocking popular staples like buckwheat and tinned meat and fish. The Centre is a very welcoming environment, bright and spotlessly clean, decorated with bright yellow flowers in blue pots.

When asking shoppers what they thought was missing from the selection, or if there were anything they would like to see stocked, most would reply that the shop had a great selection and nothing was missing.

What is so striking about the Dignity Market concept is that it offers a sense of normality in what is often a very challenging and uncertain time in people’s lives.  This normality was regularly expressed by the natural gestures of shoppers, children requesting more juice cartons and biscuits to be added to the basket, and wives telling their husbands to put the biscuits back. Shoppers also regularly checked where products were manufactured and expiry dates, just as they would in any market.

It was abundantly clear to me the amount of thought that has gone into the concept of a Dignity Market, every process has been perfected to be efficient whilst maintaining exceptionally high standards. This was regularly commented on by volunteers as being a world away from other forms of food distribution often associated with refugee populations.

Many members expressed how much they enjoy coming to the Dignity Market, because of the warm reception from the team of international volunteers, but mainly because they liked being able to choose. 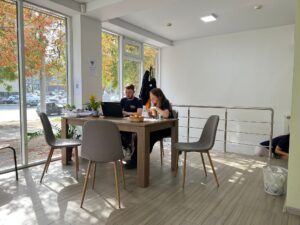 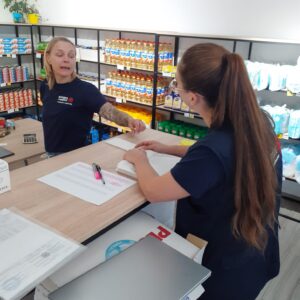 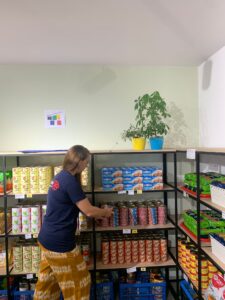 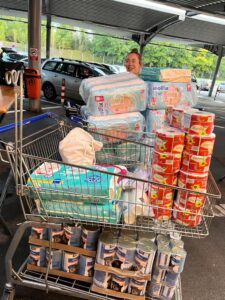 Who are the Members?

While I was the Coordinator at the Dignity Centre we were serving between 700-1000 people a week. Of this, the main demographic that we are trying to reach are those deemed more vulnerable.  The vast majority are mothers travelling alone with children and extended family, and those over 65.  To these people, the ability to choose the products that suit their family’s needs was very important.

The Centre also has a children’s play area, with chalk walls and foam puzzle floors, stocked with a great selection of soft toys, pencils and a train set. Most families had fled quickly, many just brought small bags with a few important possessions, some with just clothes. Many children had to leave their toys behind, you could see their joy in being able to choose from such a selection.

This area provided a place for children to relax, play and be creative whilst their family shops. People would frequently come to have a coffee and let their children play, it was great to see the centre being a safe community space, and for children to spend time just being children. 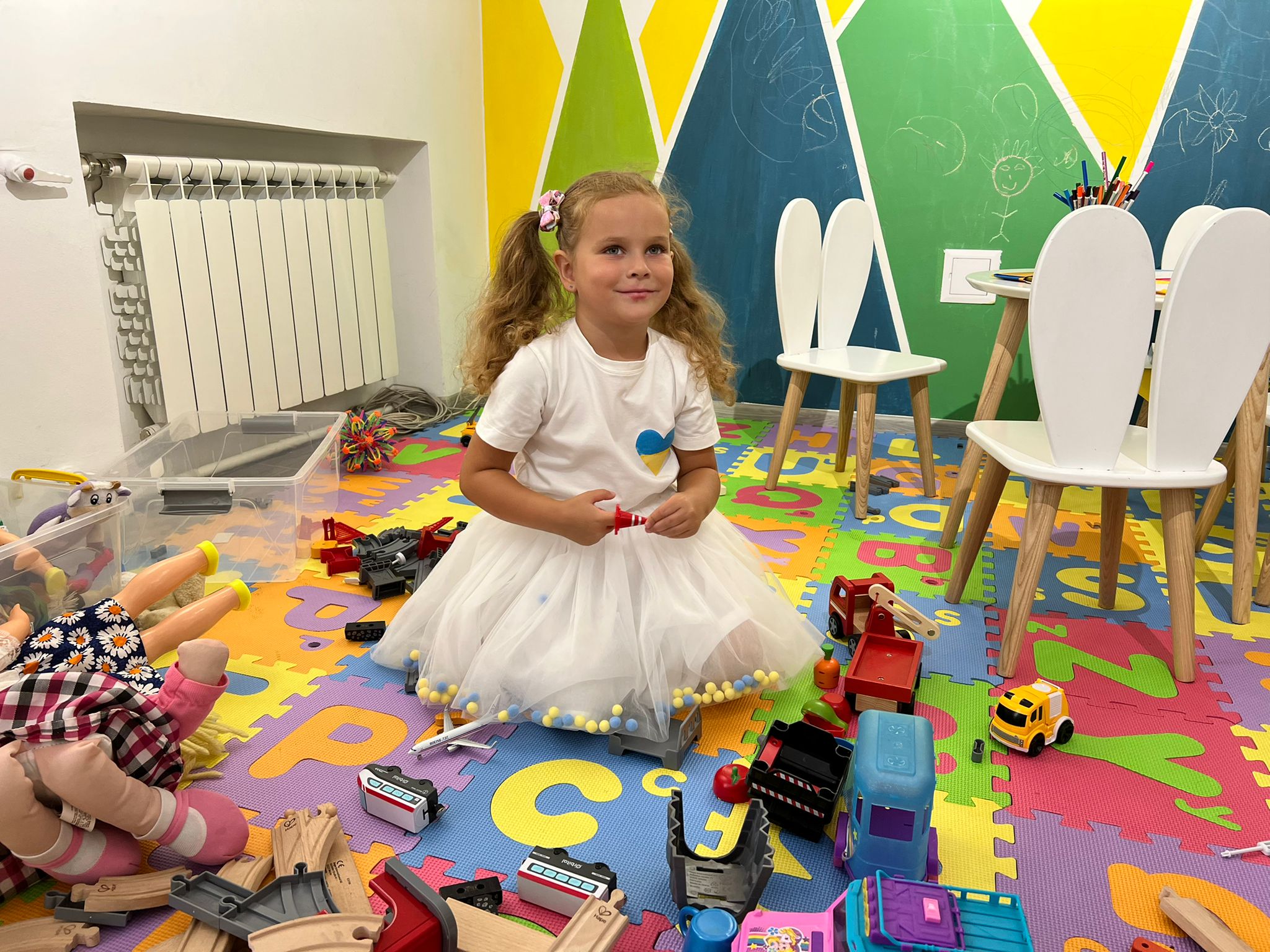 Acting as coordinator I was able to learn how RSE collaborates with other organisations and businesses to ensure high standards and deliver aid with dignity. 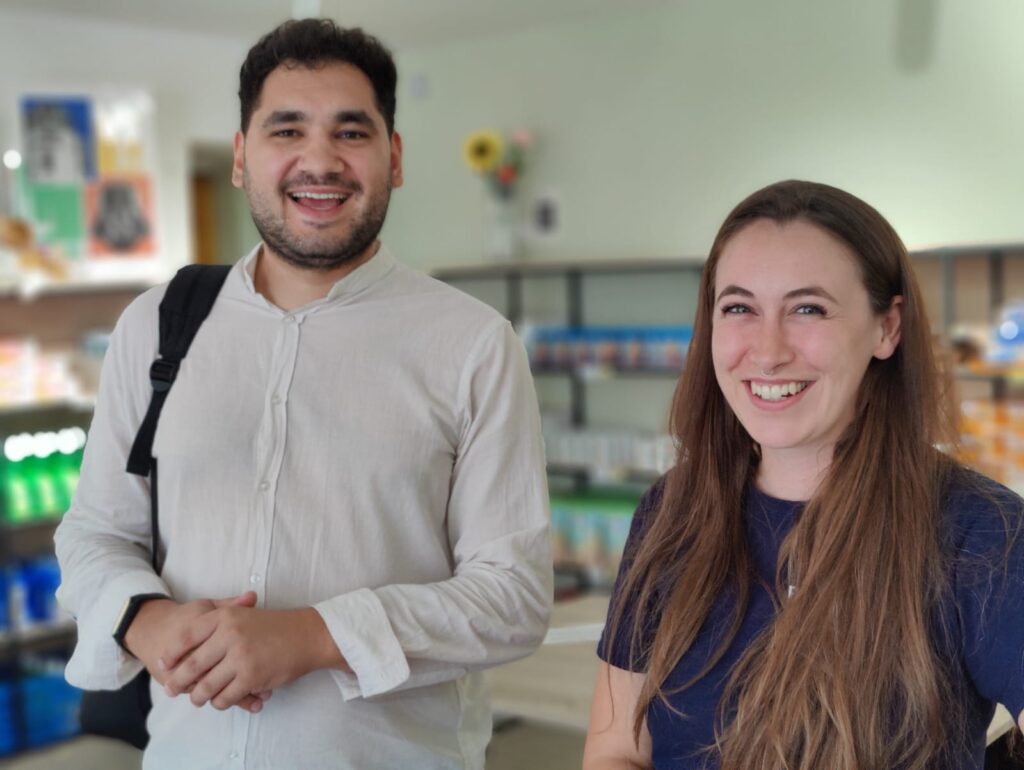 Working alongside local organisations is a vital part of building a strong solidarity movement. In all Dignity Centres RSE buys local stock & supplies, which helps to contribute to host economies, which particularly in the case of Moldova & Cyrus are under heightened pressure. Furthermore buying all of our food locally is much more environmentally friendly than transporting produce.

In Moldova, we work together with Moldova for Peace, a volunteer-based organisation that works with the Moldovan government to coordinate efforts to assist Ukrainians arriving in Moldova.

Moldova for Peace set up a website called Dopomoha, which connects refugees with organisations that can assist in Moldova. Refugee Support receives people Dopomoha identifies as needing assistance so they can shop in the market for food and hygiene products. It was great to see different international organisations collaborating to work together to ensure their best efforts in responding to the population’s needs.

Moldova, and Chisinau in particular, get a lot of bed press about being an undesirable place to visit. This couldn’t be further from the truth.

I found Chisinau to be a welcoming safe and clean city, despite visiting during political and economic uncertainty. Chisinau is a multicultural, multilingual city home to many people from neighbouring states, with a cosmopolitan array of restaurants, lively yet friendly nightlife and a collection of museums and galleries which display the country’s strong sense of national pride.

As you enter Moldova at Chisinau airport multiple signs read, “Welcome to Moldova, a small country with a big heart”. I couldn’t agree more with this statement! Despite Moldova being Europe’s poorest county, its response from civil society to the crises on its doorstep that followed Russia’s invasion of Ukraine is admirable.

There is a lot the world can learn from the example Moldova sets.

A fantastic community of volunteers

A highlight of volunteering has to be meeting so many other fantastic people who had given up their time to work in solidarity with displaced people and to raise funds to support our projects.

It was practically great to see a group of people, of different ages, with differing skill sets, all with different life experiences, come together and work so well as a team.

The volunteers all shared something, they were all focused on expressing solidarity with displaced peoples and wanting to raise awareness of the global plight of refugee rights. It was so refreshing to meet a group of people doing their part to create a society that welcomes refugees and treats them with dignity. The team of volunteers I met have restored my faith in humanity which had begun to dwindle in recent years. 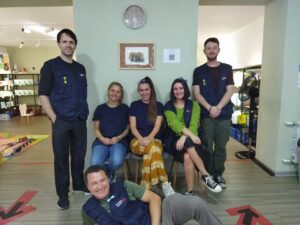 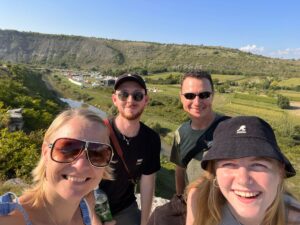 Refugee Support has now had over 1500 people volunteer from across 40 countries. It became very clear to me that having a volunteer-centred approach to aid with dignity is so important. It builds international communities and creates networks of people that work together to promote solidarity and work to defend the rights of people who have fled conflict and persecution. This plays a big part in how civil society enacts positive change.

Volunteer if you can

I am very thankful for this experience and grateful to know all the people I met along the way. But most of all I am proud to have been given the chance to lead a team that works tirelessly to create a world where refugees are treated with Dignity.

I would strongly recommend volunteering with Refugee Support Europe.

And if you’re looking for a cause to donate to, then look no further. All funds donated go straight to refugees and I can guarantee they will be spent wisely and contribute to creating a sense of normality in the lives of displaced people.