Daniel’s life matters: Imprisoned for no reason and with no end…

‘I’m so confused. I really don’t know what crime we committed.’

We heard from Daniel* briefly in our previous article, The Pandemic’s Hidden Victims. He remains in detention at Pournara detention centre and has recently been told that he will be there permanently. He has committed no offence, but he spends every day under police guard, not permitted to leave the camp at any time. This is unlawful according under international law.

Daniel is a human being, who deserves dignity. Here is his story…

Daniel was forced to leave Nigeria in early 2019. Upon arrival in Cyprus he immediately applied for asylum. His case has remained open ever since.

‘Life has been complicated for me in Cyprus.’

Asylum seekers in Cyprus are only allowed to apply for a limited number of (low paid) jobs, and finding work is hard. Even if they find work, the Labour Office will not necessarily approve it. They have to rely on meagre government handouts in order to get by. That is mostly in the form of vouchers that can only be used in certain stores, a demeaning and expensive form of support.

Daniel is also one of many who has faced overt discrimination:

‘Life has been up and down, sometimes too hard for me to handle. Finding somewhere to live as a Nigerian is very difficult. I still don’t know why it is that way. Even when you have your money to pay for the apartment, once the landlord of the house knows you are African, they just say no.’

Daniel has been moved from one form of accommodation to another. After the asylum service moved him to Ayia Napa, he and his flatmates were visited by representatives of the Asylum Service and Welfare Office. They were told that they were to be moved to Pournara, a camp situated at Kokkinotrimithia, just outside of Nicosia.

Official statements from the Interior Ministry said that asylum seekers were being detained for public health reasons in the face of the coronavirus pandemic, but the government officials gave Daniel and his friends a hint of another possible reason.

‘They came to our apartment and started saying the government said the country’s economy had gone down, and that it can’t afford to continue giving us benefits.’

They were offered 750 euros if they would leave the country voluntarily. Otherwise, they would be held in detention for an indefinite period. When we asked Daniel what he would do if forced to go back to his home country his answer was simple:

‘That would be the end of my life.’

They were told they had a few days to prepare, but the next day the police arrived, accompanied by government officials and people from the UN. 24 hours after receiving the news, the men were removed from their apartment by force. They were told to sign contracts permitting their transfer and were then bundled into a bus heading for the camp.

They found conditions in the camp to be harsh. The overcrowded tents are too hot in the day, and too cold at night. Daniel gets chest pains and finds it difficult to breathe in the afternoon heat. Temperatures are already well over 30°C and can regularly climb to over 40°C. Medical care is minimal.

They are under constant police guard behind razor wire fences:

‘I am not allowed to leave the camp. If I try to leave I will be forced back by the police.’

He says that some of the police can be friendly, but others have displayed racist behaviour.

A few weeks ago, Daniel said,

‘I feel worse than a prisoner, because of the way we are treated here. We lack drinking water, they give us bread without water for breakfast. 80 people sharing five bathrooms and five toilets.’

Since then he has been moved to a section with even more people. He now experiences depression and says that he’s giving up hope.

The camp’s inhabitants have mounted peaceful protests and a hunger strike at the living conditions. Police have responded with tear gas. On 24th May local people came to the outside of the camp to mount their own protest, soon followed by similar events in the capital, Nicosia. The government branded these protests as ‘concerning’, but for Daniel and others it meant something more:

‘We were really happy seeing Cypriot people fighting for us. They made me feel human and I’m so proud of the people who took their time and effort to do that.’

Just as the country’s lockdown was coming to an end, the Interior Ministry announced that no-one would be allowed to enter or exit the camp due to an outbreak of scabies. Daniel and others in the camp dispute this claim and believe that it’s just another excuse to keep them there.

On 4th June Daniel’s name was called out by camp authorities. They told him that he would be staying permanently.

‘They never explained why.’

There are rumours in the camp that the government is planning to deport them. Judging from statements made by the Interior Ministry, the government does indeed have plans to deport people from the camps. Daniel should be safe, as he has his documents, but in times like these it’s impossible to tell.

Daniel is a human being. He is a talented artist, and would like to open his own art gallery in Cyprus one day. He has spent much of his time volunteering at Refugee Support’s Dignity Centre in Nicosia and is known for his kindness and generosity. He longs for little more than the ability to have his own career and to start a family. He has dignity.

* – Daniel is an alias. His name and certain minor details have been changed for his own protection. 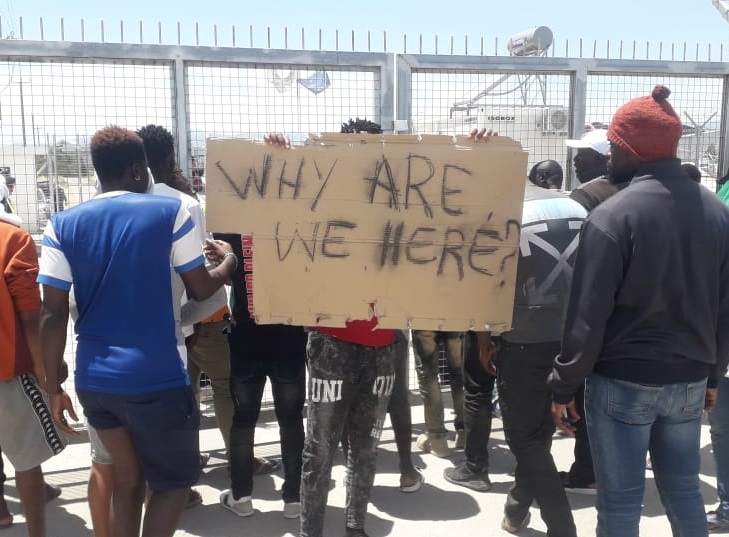