Refugee Support focuses on providing ‘aid with dignity’ to Refugees stuck in camps. While an incredible experience, the aim of this post is not to romanticise the crisis, as many media outlets seem to be doing. Rather, I want to use this post to encourage you to really engage with the biggest humanitarian crisis of our time.

It is important to understand that the crisis is still growing. Children are still being born in desolate refugee camps. Teenagers are still watching their lives fly by, robbed of any education or future. Adults are still forced to wait and reminisce on the life that they once had, fearful of the one they will lead next. Unfortunately, many people take the view that the crisis is now too big for them to have any meaningful impact on it. I cannot emphasise how wrong this is. Having seen the massive impact that my peers had in the camps, I realise now that no gesture, however small, is unhelpful.

Accordingly, I have come up with a couple of suggestions as to how you can do your bit in alleviating their crisis. Some of course require more commitment than others. However, something is better than nothing, so I would urge you not to take a fatalist approach and really consider some of these actions, no matter how small they may seem.
(Links for relevant articles will be at the bottom of the post, for those who are interested)

Firstly, I’d really encourage any of you to go volunteer. While it may seem easier to donate funds instead, this act should be taken with a pinch of salt. While undeniably pivotal to an effective response to this crisis, donations sometimes cause more problems than they solve. Money is being thrown at the Refugee Crisis without any real long term plan- one official estimates 70 out of each $100 contributed is wasted.

Instead, having actual people in the camps has a much more tangible impact. It sounds stupid, but having people work in the warehouses sorting things, handling distributions and running schools is paramount to making the camps better. Boots on the ground make the camps and donations therein run more smoothly. The smoother the camp, the more they can start to resemble normal life. For Refugees who’s lives have been capsized into the opposite of normality, the importance of this cannot be understated.

If you do decide to go Volunteer, please research it carefully. While volunteers are incredibly helpful, random show-ups are not. Organise it well, contact the NGOs, and make sure they need you where you are going. There are Facebook groups which are very well organised, notably “information point for Greece Volunteers”.

My second suggestion is largely addressed to those reading this with English Passports. Make no mistake, the efforts of the UK to help with this crisis are nothing short of lamentable. Of course, not every country is pulling their weight. Indeed, some countries like Germany are pulling more than their weight. This is no excuse for the UK however. This is mainly because of strange phenomenon: so many of the volunteers I met are actually English, or from the UK. The UK has a history of welcoming refugees, notably in the Second World War. So why is the UK doing so little on a national level, considering how much it does on an individual level? Honestly, I find it baffling. The only solution I can come to is that the UK is so used to individuals responding charitably that the governments don’t feel the need to. In light of this unique crisis, we must change this.

If you do not have the time to volunteer, the next best thing is to lobby your local MP. Write them a letter, email Jezza in the hope of being quoted in PMQs, or join in on protests. History will not look kindly on the British governments in charge if they continue to turn a blind eye to the burgeoning problem, and it is only those with passports who are realistically going to make those in power change.

My third suggestion is directed to those reading this from European countries who are actually taking in Refugees. Increasingly, such countries are using the Refugees as a sort of brownie points method; ‘look at us, we’ve taken in x refugees, aren’t we great’. Of course, this is admirable. But unfortunately simply ‘letting them in’ does not really alleviate the problems. Refugees in Berlin are sometimes living in worse conditions than the camps they left in Greece. Imagine you yourself being in a foreign country, say China: you have little money, no community, do not speak the language, are wholly unaware of the cultural laws, and little help from the government. Add to that the likely factor of mental health issues and PTSD from the war you have just fled, and the situation is far from the rosy. This problem very rarely penetrates the media, because the numbers are the only thing governments really talk about. Politicians are, as ever, are reducing people to numbers. If you are living in a country which accepts Refugees but does little to support or integrate them, then please consider doing your bit to change this. Even small acts can really go a long way. For instance, United Invitations is a platform for organising dinners between citizens and refugees at the homes of the citizens, helping the new arrivals merge into the community. For those of you at University, lobby your institution to provide more funding for refugees, as Oxford recently did. Even better, if you regularly use AirBnB, let your house to a refugee. AirBnB not only facilitate this, but will also match any donation you make to certain organisations. All of these are little things, but they will go a hugely long way in making refugees more comfortable in this new home. 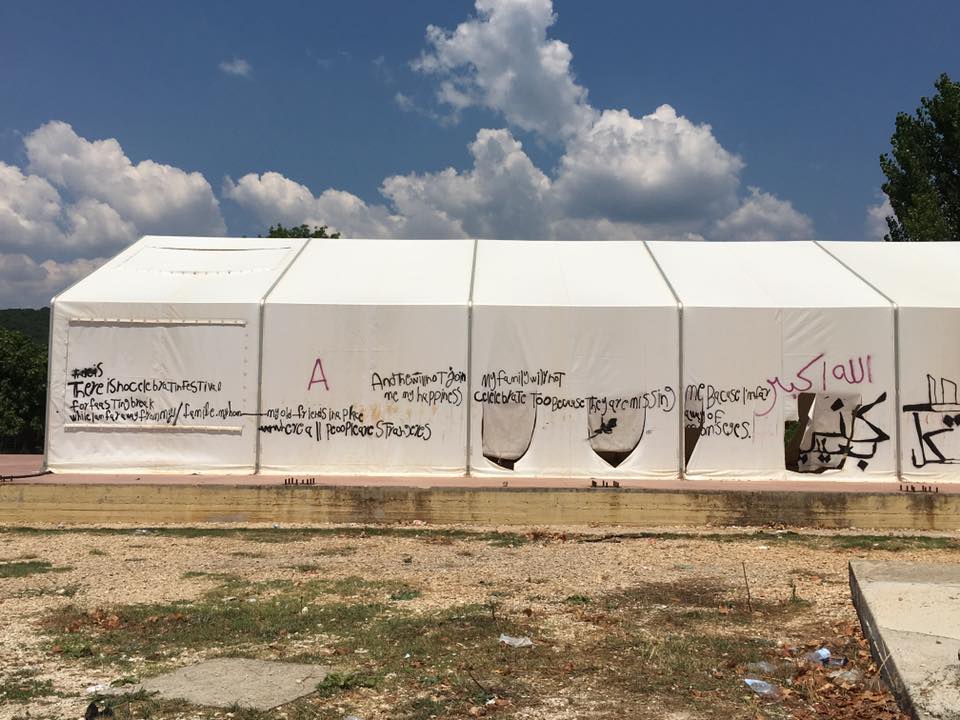 I hope some of this is helpful, and will at least make you think about the crisis and what you can do. This photo is one of the tents in the camp, where some of the Refugees wrote a poem on the night of Eid. I’d like to finish this post with it in a final effort to galvanise you all into acting.

There is no festival for celebrating feasting break while I am far away from my family//
My home, my old friends
In a place where all people are strange eyes
And they will not join me my happiness
My family will not celebrate too because they too are missing me
Because I’m far away of moms eyes

Article on donations
Facebook group for Volunteers
interesting paper about integration
contact your MP UK
loads of ideas from UNHCR on how to help
http://www.unitedinvitations.org/
http://www.bbc.com/news/uk-england-oxfordshire-36546652
https://www.airbnb.com/welcome/refugees