The Rohingya: there’s an international lack of political will

A guest post from Volunteer Lizzy Galliver who went to a talk by experts on Rakhine state came at SOAS in London to discuss a question that has been plaguing the international community since late 2016: what can be done to help the Rohingya? 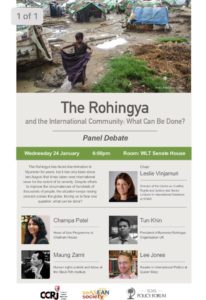 The answer was not optimistic: all three speakers emphasised a current stalemate stemming from a lack of political will in both Myanmar and Bangladesh. Lee Jones, reader in international politics at Queen Mary, suggested a focus on the safe, voluntary and sustainable repatriation of Rohingyan refugees to Myanmar; but, as Maung Zarni (human rights activist and fellow at the Sleuk Rith Institute of Cambodia) pointed out, to what land were they returning? Destroyed livelihoods and an institutionalised culture of discrimination has left the prospect of ‘home’ a bleak one for the Rohingya. For Champa Patel, Head of Asia Programme at Chatham Head, the core issue is an absence of citizenship and thus a perpetuation of statelessness. For this to change, international pressure is essential.

What do we mean by the international community? This question was also tackled by the speakers, who noted the marked absence of a ‘community’ offering a coordinated response to the Rohingya crisis. The political agendas of distinct bodies at different levels seem to have prevented a common view from emerging. For Zarni, the silence of the United Nations Security Council has been particularly prominent, the prioritisation of sovereignty trumping the integrity of human beings. Patel noted the escalation of tensions in Bangladesh, particularly with national elections on the horizon. And while Jones emphasised the need for China to step up in the crisis, Patel suggested that regional actors like Malaysia, Indonesia and Thailand ought to play a greater role.

Despite some clashes of opinion, all three speakers converged on two points. Firstly, that sanctions are likely to cause more harm to those in need than to the perpetrators themselves. Secondly, that humanitarian support is a vital operation through which the international community can come together. With conditions in refugee camps deteriorating by the day, the need for an extensive and coordinated approach to humanitarianism is more essential than ever. Patel spoke of a life in limbo for refugees in the camps in Bangladesh – particularly in Cox’s Bazar – with days plagued by an absence of resources, safety and education. While pressuring a political resolution to the root causes of Rohingya persecution is crucial, in the meantime immediate global responsibility lies in aid-work. Access of NGOs to Rakhine state, the speakers also stressed, is a necessity too: not everyone crossed a border.

On top of emergency aid, Patel noted, is a need for contingency planning – something that ‘nobody wants to talk about’. Where Jones called for a strong reconstruction effort to rebuild farmland and homes in Rakhine state itself, Patel insisted that there will a population left behind in Bangladesh, and so long-term thinking is indispensable. Herein lies the collaborative role of local and international aid organisations: to alleviate the current lack of resources in camps while planning for what threatens to be an even more problematic future.