We supported the Rohingya refugees at the Tumbru camp in Bangladesh from November 2017 to February 2018. We had strong support from the Rohingya community, other NGOs, donors (in particular Carry the Future) and volunteers. But the bureaucracy made it impossible to continue with our projects.

The needs are still extreme and urgent. Bangladesh is struggling to cope, repatriation faces insurmountable security concerns and their living conditions are precarious.

How did we start?

In November, we sent an experienced and knowledgeable team who identified Tumbru camp, with 6,300 people, situated in a no-mans-land between the borders and so excluded from many aid services.

We carried out a needs assessment and had detailed consultations with the residents there. Over half were children and there were almost 200 pregnant women. They had fled violence quickly and were living in temporary structures of bamboo with very few belongings. They had no means of supporting themselves. Malnutrition and disease needed immediate attention. 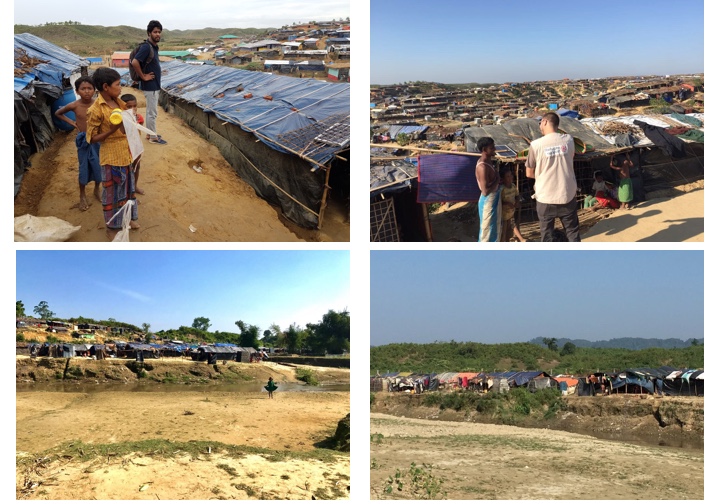 We arrived with a plan to create some self-sufficiency for the Rohingya rather than survive on handouts. But the emergency needs were so acute we began by providing what they needed: food, clothing and medical support.

What did we do?

A. Five large scale nutritious food distributions to the 1,300 families there. Each family received 3.5 kgs of fresh fruit and vegetables in each distribution between 5 December and 1 February

B. One large clothes distribution of brand new winter clothing for the 2,700 children under 13 to help prevent illness and hypothermia, purchased from a manufacturer in Chittagong. 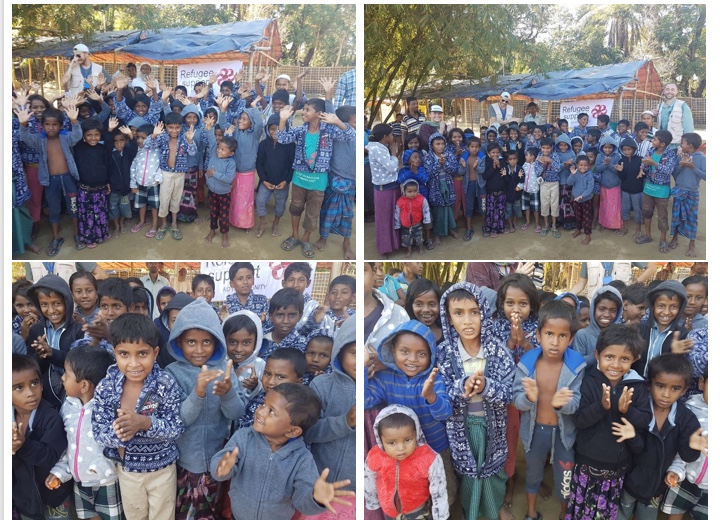 C. Creating, managing and funding a neo-natal clinic next to the camp twice a week, every week with a doctor, nurse and medicines. Although it was created primarily for pregnant women and new-born babies, it has become a general clinic. We could not turn away other medical presentations that were within our power to address. 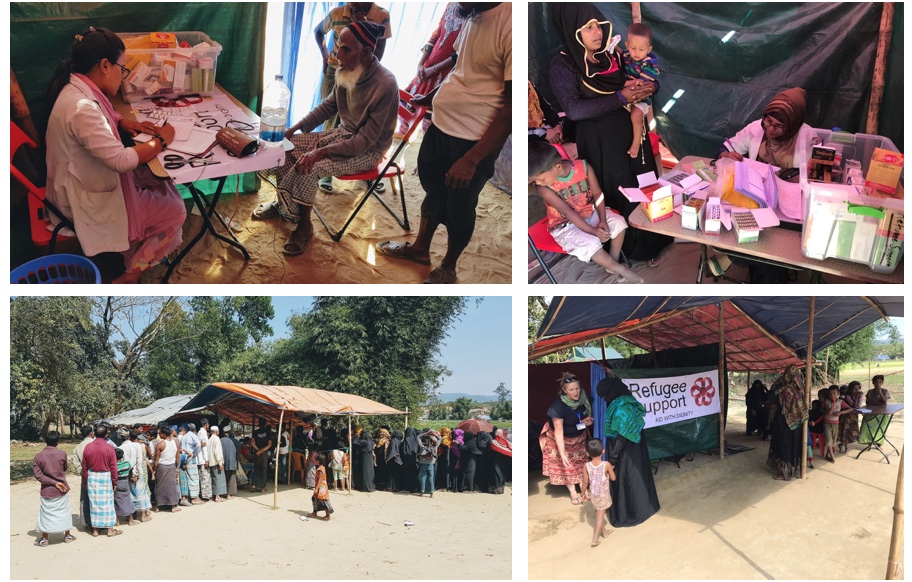 D. Distributed 700 school bags and much-needed learning materials to the pupils of a local Bangladeshi school to build some bridges between the communities. 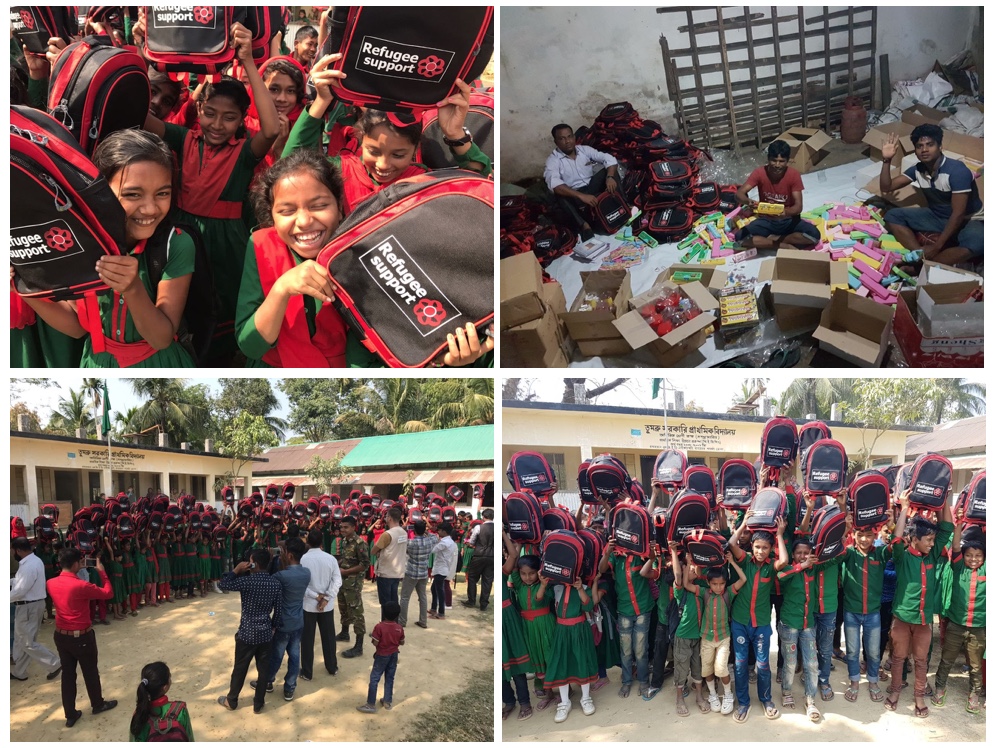 How much did we spend?

The cost of aid actually delivered was:

The total spend was higher than this because of unavoidable operating costs. For example, the only accommodation available is in Cox’s Bazar, a long way from Tumbru. The vehicle, driver and fuel for 3 months cost £2,180.

We probably saved lives and certainly helped many cope with malnutrition and disease. The nutritional benefit of providing fresh food is obvious.

In addition, we arguably strengthened a community under threat from an aggressive military.

We should also not underestimate the morale-boosting benefit of distributing aid with dignity to a community that is excluded from other support because of its location.

In parallel, we supported Bangladesh and hopefully helped to reduce tensions. We bought what was needed from local businesses, employed local people and distributed to a local school. The negative consequences of such a sudden influx of so many desperate people are causing unrest in the Bangladesh community: an increase in the price of basic foodstuffs, pressure on wages, fewer work opportunities, environmental degradation and political unrest. Doing what we can for the local community is critical.

Why did we leave

It became increasingly difficult for us to provide a service in the area. Our main difficulties were access to the camp and gaining visas for our team to operate on the ground.

Tumbru was slated to be moved into Bangladesh in January. Then the Myanmar military established a bigger presence next to the camp and installed a new gunpost. It threatened the camp residents and there was intimidation.  In response, the Bangladeshi military has stepped up its presence and made access harder.

At a national level and despite many, many talks with high level officials, we were unable to secure NGO visas for our two team members on the ground. Like many other overseas NGO workers on the ground there, they have been working on 30 day tourist visas. This means regularly exiting the country and the border authorities will not keep granting tourist visas for people re-entering. Military checks in the area have resulted in some NGO workers being deported for working on tourist visas. The government policy is being challenged by a coalition of NGOs but we are not seeing any movement.

We have begun the process of registering as an NGO in Bangladesh but, even with the support of key decision-makers and the use of a local lawyer, this could take many months and getting working visas may take longer.

Those conditions made our presence untenable. The situation on the ground is so challenging and sensitive we need a stable team on the ground.

This meant that we withdrew our field presence from Bangladesh while we continued with our registration process. Our hope is that the government speeds up the granting of NGO visas and we can re-enter. The cost of registering is also prohibitive: at least USD 12,000 plus around USD 4,000 in legal fees. We can find a donor who will pay that but only if we can move quickly, have freedom to operate and scale up our distributions. 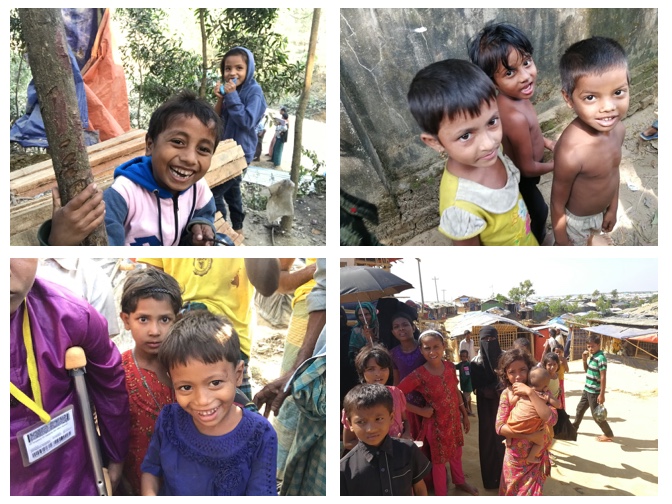