Salieu Gbla is an asylum seeker from Sierra Leone. He has been living in Cyprus for the last two years, waiting for his asylum claim to be heard. In that time, he has gone from receiving aid at Dignity Centre Nicosia to becoming one of our community volunteers. Recently, he has also started studying at the University of Nicosia and has even started his own organisation for disabled asylum seekers. We interviewed him about life in both countries.

Salieu is a familiar face to refugees and asylum seekers in Nicosia, Cyprus. For the last year, he has offered his expertise, along with a contagious smile, to everyone who passes through the city’s Dignity Centre. His life has been marked by war, persecution, and disability, but he is creating a new life for himself and others in the country’s capital

Disabled and homeless in Sierra Leone

Salieu was born in Sierra Leone during its devastating civil war (1991-2002). He was sent to neighbouring Guinea at the age of five to live there temporarily. In the confusion of being uprooted from his home, he lost touch with his parents and became homeless for nine years. During that time, his father passed away without his knowledge.

Around the same time, he was involved in a road traffic accident that broke his leg and almost killed him. Shortly after, he contracted Polio, which left him with permanent injury to his legs and feet. It affects his mobility to this day, and his legs frequently cramp up and cause him pain.

Life is difficult for disabled people in Sierra Leone. Those who are unable to work are often forced to beg on the street. They often experience physical abuse from the people they meet, including the police. Many are unable to defend themselves.

Salieu is also bisexual. Male homosexuality in Sierra Leone was outlawed by the British in 1861 and never subsequently legalised. The offence carries a life sentence, although this is not enforced. Instead, the LGBT community is terrorised by the state, and by vigilantes who go unchecked. They are imprisoned, beaten, tortured, and killed.

Finding people they can trust is difficult, but relationships are possible. They form tight-knit communities that look after each other. This is where Salieu met many of his friends.

“Someone will do what will give him peace of mind, trust, and interaction. It’s not about the pleasure or the feeling. There are some with long-term relationships, but they are still afraid to be caught by people or the police. Finding each other is just the same as finding a woman, by talking, but it has to take time, to see if the person is really an LGBT. If they know you’re an LGBT, family will disown the person and the police will beat and put the person in prison.

“Things are really bad in Sierra Leone. I faced a lot of abuse in my life – police beatings, torture, I’ve been in prison. It was a really horrible life for me in Sierra Leone. In 2018, I attempted suicide, but somebody who was watching saved me. Life was really tough.”

In 2020, an incident was caught on camera involving Salieu’s friends being beaten in the street by police. A group of disabled and LGBT people were living on a plot of land in Freetown, the capital of Sierra Leone. An organisation called House of Jesus claimed ownership of the land and was using it to provide a home for the group. Salieu said that, when House of Jesus failed to build on the land, people with government connections seized it against their will. When the police were called, they asked no questions and instead attacked the group.

Salieu and several other people were arrested and imprisoned. Two of his close friends died while in custody after they became sick and received no medical treatment.

“After I came out, I didn’t have anybody again. These are my friends. We move together, we play, we laugh, and now I lose them. I don’t have anybody anymore to look at, to be part of, so I decided to move from Sierra Leone to Cyprus, because I need to move my life.”

Salieu travelled to Cyprus in November 2020. Cyprus is currently the busiest route into Europe for people fleeing Africa and the Middle East. Gaining asylum is a long and arduous process. He made his application upon arrival and stayed in the infamous Pournara camp, just outside of Nicosia, for the first three months.

Ponrnara was designed to house a maximum of 300 people for no more than three days upon their arrival in the country. The camp now has thousands of residents living in cramped and dirty conditions for many months. There are serious safeguarding concerns, including the risk of violence and disease.

Salieu was forced to camp outside through the winter. His legs cramped up in the cold weather, causing him a great deal of pain. He tried to speak to the authorities, but they failed to listen.

In Cyprus, asylum seekers are permitted to work, but they are only allowed to take jobs that appear on an official list of roles. These jobs tend to involve intense physical labour, which puts someone like Salieu in a very difficult position. Salieu’s physical condition makes it very hard for him to find work, but until he gains refugee status, he is not able to receive the disability payments to which Cypriots are entitled.

“I came out [of Pournara camp]. I said, ‘Okay, I’m going to face life again.’ I started going out, looking for work, applying for school. Then I started having flashbacks to Sierra Leone. People don’t understand or even want to accept our situation. People just look at someone who has a disability as a kind of person who doesn’t fit or doesn’t deserve to have a better life.

“All you can do is stay at home. People think the government is giving you support, which it’s not. The support disabled people receive is the same as everyone else receives. I apply for jobs, but no one accepts me because of my physical appearance. So, I get thinking, ‘Where am I? Is this Africa or is this Europe?’ I was really discouraged and really depressed.” 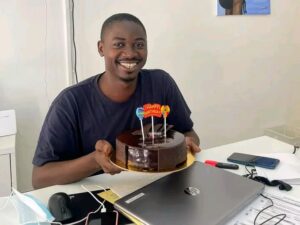 This was when Salieu sought aid from Refugee Support Europe, which opened a Dignity Centre in Nicosia in 2019. The Dignity Centres provide food and other essential supplies to refugees and asylum seekers, as well as a range of other services. Unlike other aid providers, Refugee Support Europe gives its users a semblance of normality with free grocery stores, where people can choose whichever items they want via a points system.  It’s a dignified approach that also cuts down on waste.

“Most organisations will put things in a plastic bag without you choosing. Most of the things in the bag you will not need, so you put it in the dustbin. But if you give someone the opportunity to go and choose, even if it is a little, Refugee Support is great. It’s different from other organisations.”

Salieu later decided that the best way to keep his mind active while unemployed was to start volunteering. The Dignity Centre’s co-ordinator Paula asked him to come in and help people with their Labour Cards.

“I was smiling! I said, ‘Yes, this is just what I need.’ I don’t know what Paula saw that made her bring me in. She’s an angel. She gave me more hope for me to be here.

“During that time there was a lot of demand. The people started trusting me: ‘There’s one African guy in Dignity who can do the Labour Card!’ People started coming. A lot of people.

“I was really happy to give that kind of service, to help more people. If I go outside, people will say, ‘Hello man. How are you?’ That kind of respect people give you. I became popular.

“Meeting new volunteers, people come and go. They’re really nice people, very kind. When you meet somebody, when they give you that kind of smile, it gives you hope. For me, if you want me to open up to you, talk with you, give me a smile. If you give me a smile, I can have full confidence to talk with you.

“Outside, people really stare a lot. Cyprus people, if they saw you, they would look like this, the kind of eyes that make you discouraged of yourself. You will notice something is going on. It reflects like a mirror. A lot of people with disability, they stay in, they don’t go outside, because people look at them, they do not accept them. For me, I don’t care anymore. I go outside every day.” 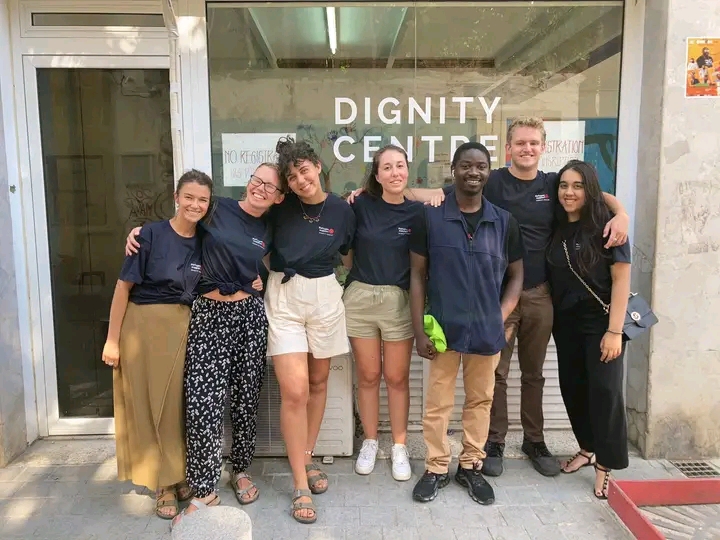 Inclusive Society for People with Disability

Salieu has learned a lot from his experiences. In July 2022, he started an organisation for disabled asylum seekers with his friend Tchouanteu Stephen Noel, from Cameroon. The group, Inclusive Society for People with Disability, holds meetings in Nicosia, offering support and aiming to raise awareness of the issues faced by those who find themselves in a particularly difficult position – unable to work due to disability and unable to claim disability benefits because of their immigration status.

“We need everybody to be included. No one should be left behind. It’s not about physical appearance, it’s about your brain. If your brain is okay, then you can think, you can do whatever thing you want.

“We’ll put in our complaints, our needs. This is what we want. If it doesn’t happen, we will protest. Everybody will know that we are here. We are not animal, we are human being, but our needs are not met.

“We need to work together as a team. If we are a group, they will know that this is really serious now.”

What future does Salieu see for himself in Cyprus? After a long struggle, he has managed to obtain a partial scholarship at the University of Nicosia, studying computer science. He still needs money to be able to study all of the modules in his degree and has his own fundraiser.

“I want to be a programmer if I have the opportunity to finish my school. I really love technology, and I want to help people with disability in terms of technology as well.

“I’d really love to stay in Cyprus because I see this as my home.” 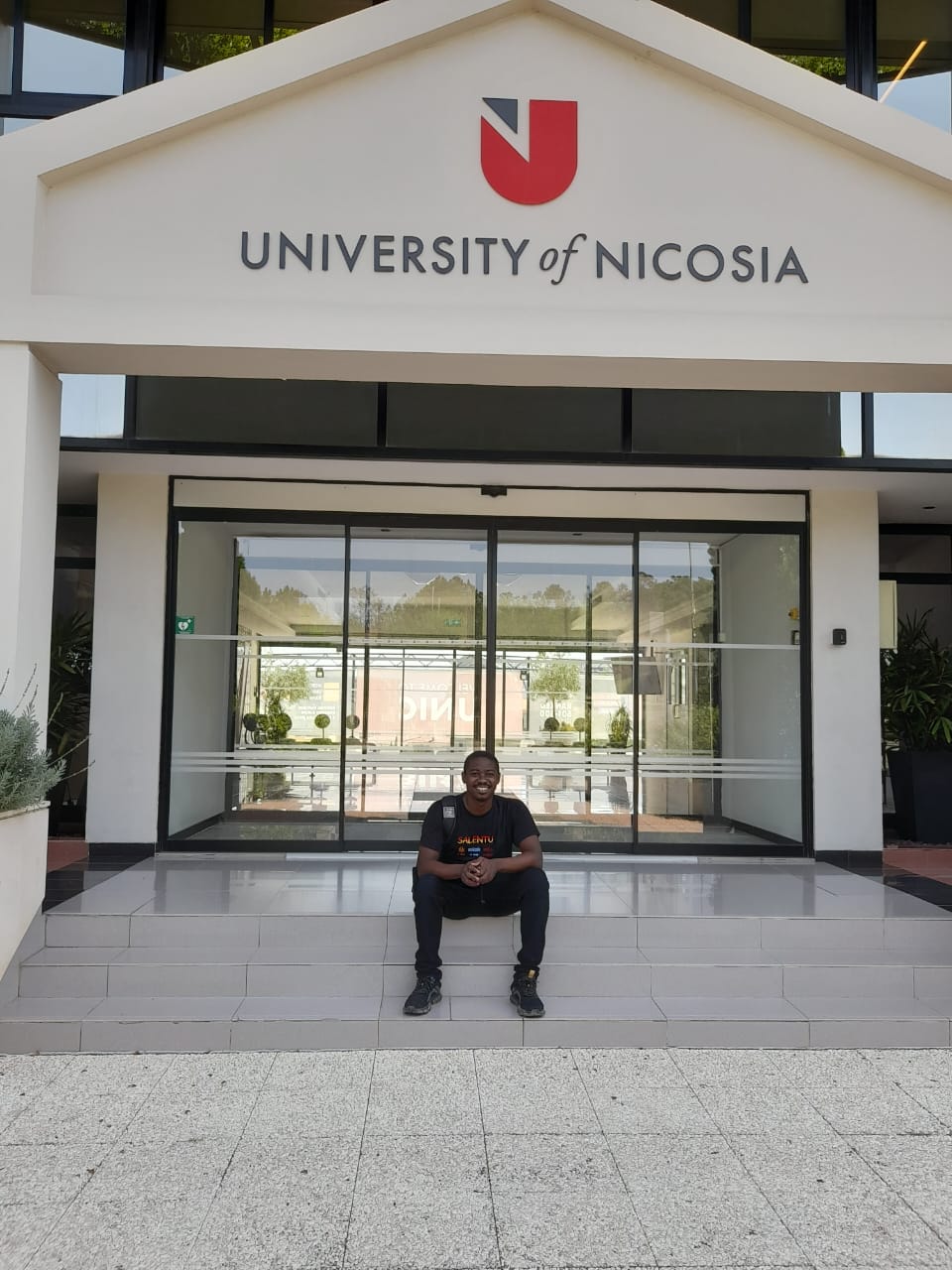