Volunteer Bea “I am the daughter of a refugee”

I am the daughter of a refugee and I have been volunteering at Alexandreia for nearly one month.

In that time I have had the good fortune to meet many very lovely people. In particular I have been moved by the stranded families, many separated from other close members of their family. When I see the young children here at the camp, I think of my mum and what happened to her and how lucky she was.

You see my mother, Eva, and her small brother, Michael, arrived in England as unaccompanied minors on the Kindertransport at the end of 1938. What I want everyone to know is that they did not turn into scroungers or criminals but became hard working people who really care about the communities they now live in.

On 15 November 1938, five days after the devastation of Kristallnacht, the Night of Broken Glass in Germany and Austria, a delegation of British Jewish and Quaker leaders appealed in person to the Prime Minister of the United Kingdom, Neville Chamberlain. Among other measures, they requested that the British government permit the temporary admission of unaccompanied Jewish children, without their parents.

The Kindertransport (German for “children’s transport”) was an organised rescue effort that took place during the nine months prior to the outbreak of the Second World War. The United Kingdom took in nearly 10,000 predominantly Jewish children from Germany, Austria, Czechoslovakia, Poland, and the Free City of Danzig. The children were placed in British foster homes, hostels, schools and farms. Often they were the only members of their families who survived the Holocaust.

Uncle Michael, who was only 1 year and 10 months old at the time, remembers Kristallnacht well (the night of the broken glass). At the time my mum was in hiding at a relation’s school in the country, my grandfather was “disappeared”, while my Grandmother Thea and Uncle Michael, already dispossessed, were living in a hostel for Jewish mothers and babies. On Kristallnacht their hostel was attacked by stone and fire throwers. It was a very scary night and one that has affected my uncle Michael all his life. 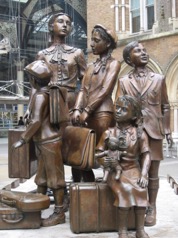 Things moved fast after that night in Germany. The school was closed and my grandmother was aware that time was short for the Jews. She contacted a German Jewish family friend, Ruth, (who had seen the light a few years earlier and found work in Manchester UK), and asked her to help get the children out of Germany. Ruth contacted the Quakers to see if they could help her find foster parents for my mum and Michael. Having found two couples willing to foster she organised the UK paperwork. Gran, because she had proof of foster parents, was then able to get her two children onto one of the first trains out of Germany.

Mum was 7 years old and she was in charge of looking after Uncle Michael. The only thing Mum’s family had done wrong was to have had the wrong surname. My grandparents hope was that by getting the children out, at least they would survive the atrocities of Nazi Germany.

Many Quakers were Conscientious Objectors and their war effort was to foster Jewish children. My mum was fostered by the Bedford’s in Marple near Manchester. The most amazing fact I recently learned about Uncle and Auntie Bedford was that they were just 28 years old, 1 year married and expecting their first child when they adopted my mother and later another 10 year old refugee. In fact they went on to adopt three troubled boys after the war. They were truly amazing people.

The similarities with the current Syrian Refugee Crisis and what happened in 1938 are not lost on me and my family. As most refugees do, my mother learnt English fast and was soon top of her class at school. She went on to gain a degree in Maths and Chemistry and worked as a maths and chemistry teacher until she retired a few years ago. She, my uncle and all other refugees I have known through my mother are hardworking, in full employment all their working life and been net contributors to not only tax but also their local communities. 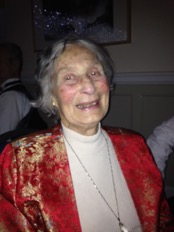 My Mum was a refugee and she has made the world a better place.

My Uncle was a refugee and he has made the world a better place.

Refugees are highly motivated to make the world a better place so I am very upset about the failure of the UK government to deliver on the Dubs amendment, and to accept just 350 unaccompanied child refugees into the UK.