Making a meal of the kitchen

Six nights a week Alexandreia’s community kitchen cooks about 200 hot and healthy Syrian meals and for refugees on the camp to either eat in the cafeteria or in their caravans. Best of all, the meals are planned and prepared in partnership between the residents and Refugee Support. To see it working has made the long struggle to get it up and running all worthwhile. 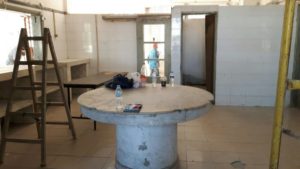 When we arrived in April there was a derelict kitchen that hadn’t been used for over 20 years but it was clear what the potential was. 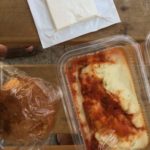 People were justifiably complaining about the quality of the food being provided by the outside catering company. 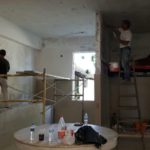 We wanted to get it working quickly and our local builder Manos immediately set to work: it was re-tiled, re-wired and we put in lights, a fan and double glazed the broken windows. In order to keep pests out, we installed 2 new doors and rebuilt one of the walls with more windows. 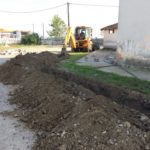 Running water wasn’t available so we had to install a new water supply pipe from another part of the camp and upgrade the drainage system. 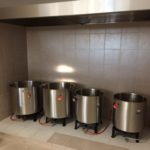 In order to provide gas for the 4 gas burners, we had to build a storage facility that was safe. We were asked by the authorities to install an underground gas tank and it took a lot of negotiation before they agreed to a secure cage above ground for 6 large gas bottles (a cheaper, more viable option). But we also had to build two walls around that area as one of the conditions.

In October, a donor who had committed to the project suddenly left us so we then had to find €18,000 of the €24,000 that had already been spent. Thank you to our loyal donors who stepped in! 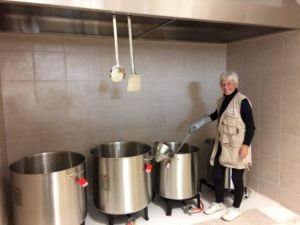 We had recruited an experienced catering manager, Sue, to manage the kitchen in the expectation that we could start cooking in November.

She got everything ready including all the utensils (thank you donate4refugees for funding those). And we also bought cauldrons (that cost a whopping €1,800).

Just when we thought we were ready, we ran into Greek bureaucracy. It needed a fire safety certificate and an inspector demanded more work including an unnecessary sprinkler system. More negotiation, more money, more time. So much time that Sue, who had spent 6 weeks waiting needed to return to France (fortunately that time was not wasted – she turned out to be one our star volunteers). 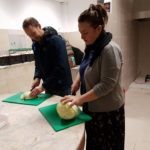 Luckily chef Jess from Australia came along just before Christmas and she teamed up with Faris from the camp to cook our inaugural meal on 25th December.

It was an unqualified success and the two of them with the support of other volunteers and other refugees have cooked some fantastic meals 6 days a week. Christmas was special but current costs are running at about 80 cents per person per meal. 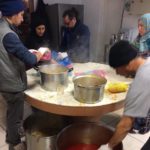 Two weeks into the project we have a new chef Pedro for the next month and based on feedback have made some changes:

– We have brought the serving time back from 7pm to the camp’s preferred time of 5pm
– We invested in sealable, take-away bowls for every individual on the camp because they preferred to eat in their caravans
– We are harmonising the buying of food for both shop and kitchen to make best possible use of donations
– Involving others on the camp in the preparation of the meals in the kitchen

We will continue to listen to feedback from the camp about what to cook, how to serve it and how everyone can be involved.

You need deep pockets and a lot of patience but, for us, watching the team cook together and seeing people on the camp being served great food has made it one of the best projects we’ve managed to deliver.

We couldn’t have done it without Manos and his team, Sue, Jess, Pedro, all our volunteers and, most important, all of you who have donated to provide great food as well as more dignity, more choice and more normality to the lives of the refugees at Alexandreia.