How we distributed toys to 400 kids who have none

Distributing anything in a refugee camp so that it is fair and dignified is difficult. With 400 kids and teenagers who had hardly any toys at all to play with, we knew it would be a challenge.

Over the last four weeks we have been concentrating on what we saw as essentials: food, toiletries, washing facilities, solar chargers, little lamps, shoes, blankets etc but was this too adult-centric? With nothing to play with, many of boys were turning to the many sticks and stones lying around the camp with inevitable consequences. There were battles over footballs. The kids were bored and craving stimulation.

The toys, most of which donated by the enormously generous Bridge2, all new or nearly new, were out of sight in the shop but we were desperate to get them out.

We decided to use the same system as we use in our shop and distribute in that way. We have 6 blocks with about 25 tents per blcok and each block has a dedicated 90 minute shift twice a week to collect their goods. That way, each family unit gets 2 dignified shops a week and we calculated that we could get at least one decent toy to every child over 3 days. The rules for toys were:

It went well and when you think what it can be like in any toy shop anywhere, the kids were incredibly well-behaved. We had next to no shop-lifting attempts (that we know of!) and very few meltdowns.

But like all work in this arena, it was bitter-sweet:

Sticking to the rules we had set may seem harsh and it was very, very difficult.

But almost every child got something decent to play with that they or their parents had personally chosen, we had no fighting over who should get what and finally at the end of the third day the camp was full of kids doing what so many of us take for granted – enjoying themselves in play. 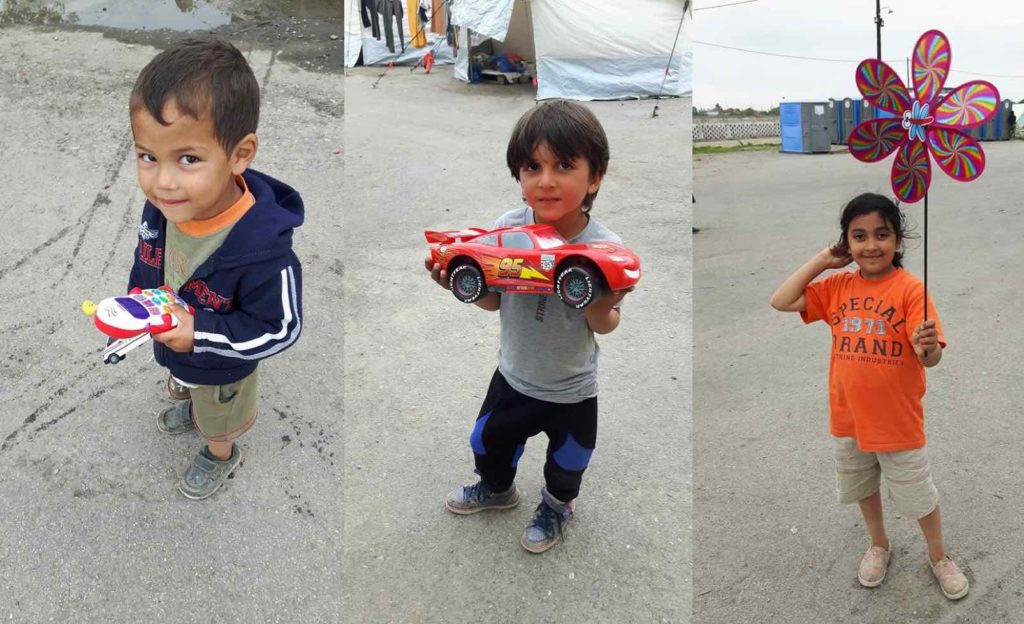