I arrived late on Monday having flown to Paphos from Manchester, which is a few hours by bus from Nicosia in the North of the Island. I immediately went to the Dignity Centre which is located just off the main shopping street in the old town of Nicosia, very close to a crossing point into the Turkish side of the island. It was easy to find the Centre from the bus station mainly because I asked some Nigerian people who were chatting near the bus. They took my bag and walked me directly to the Centre, which they knew very well.

As the week has progressed I have realised that more or less everyone seeking asylum in Cyprus has come through the Dignity Centre at some point because the place focuses on supporting new arrivals until they can get welfare assistance and labour cards and can begin their journey towards refugee status.

You will have heard it said many times that Cyprus has more people seeking asylum per head of population than anywhere else in Europe and on the streets of Nicosia that is very evident.

Anyone volunteering here needs to ‘hit the ground running’ as the Centre is very, very busy and COVID restricts numbers inside so people tend to congregate outside the Centre and can have a long wait for the services we offer.

The main countries seeking asylum in Cyprus are African. This week I have met many people from the Democratic Republic of the Congo (DRC), Nigeria, Sierra Leone, Liberia and Somalia. As well as a number of young women from Bangladesh and one young man from Afghanistan.

It feels to me that Cyprus has, in the main, been a little more welcoming of asylum seekers than the UK. There has been an integration programme in place on the island and from my initial reading of the English language newspaper there is some understanding and empathy. However in recent time the numbers arriving here have rapidly increased and Cyprus, like most countries, have struggled to respond. The view here is that Turkey has allowed large numbers of asylum seekers from Africa to arrive there, in Istanbul, and in the North of Cyprus on ‘flimsy’ visa’s. Once in Turkey they inevitably cross the border into Greek Cypriot Cyprus which is seen as European, even though It is not part of the Schengen agreement. This means people who enter Greek Cyprus and seek asylum cannot travel to other European countries or the UK.

On arrival in Greek Cyprus all asylum seekers have to go through a transition camp to register. The Pournara camp, just outside Nicosia and very near the UN-controlled buffer zone that has separated Greek Cypriots and Turkish Cypriots for almost half a century, hosts some 3,500 people from the DRC, Nigeria, Pakistan, Iraq and a string of other countries who have mostly arrived via the divided island’s north. Pournara was built for 800 people. Of the 3,500 currently there, only 500 asylum seekers live in prefabricated shelters with electricity and heating. The rest are living outside in unsuitable tents and under tarpaulin. Believe me Cyprus is cold in January!

The Dignity Centre is run by Refugee Support Europe, a small charity founded in the UK by two guys who met whilst volunteering in ‘the jungle’ in Calais. The charity has a project in Nicosia Cyprus, a new launch in Ioannina in Northern Greece and a programme in Birmingham UK with a focus on settling and integration. 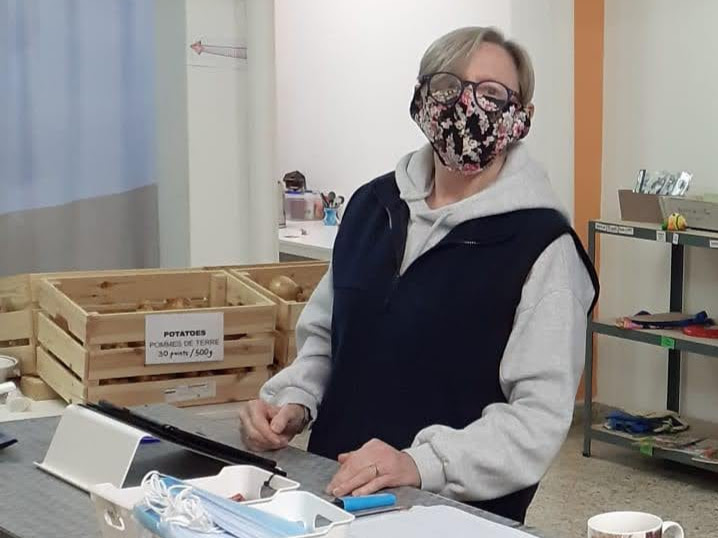 The work I have been involved with this week has been varied and focused on the limited activity and support that can be offered at this time.

The Dignity shop, where people can choose from a range of basic food items for their first 2 months after leaving Pournara camp is so greatly valued by new arrivals who often have no money and are waiting for the limited benefit support.

I have also helped with new registrations to the Centre, between 70-100 everyday!

The centre also offers basic services such as helping people get COVID safe passes necessary here in Cyprus so people can enter supermarkets, restaurants, public buildings and shops. Many folk had their vaccinations in countries not recognised by the EU so an application process is needed to verify the dose and get the pass.

Helping people obtain their Labour Pass which brings them access to unemployment benefit (minimal) and employment opportunities. The Dignity Centre employs a refugee with experience in doing Labour Card applications.

General photocopying for people who need documentation for their asylum process and trying to address queries that arise as people try and settle here in Cyprus.

The bigger concern for us all is the huge numbers of people wanting access to the services available through the Dignity Centre, particularly the Dignity shop. It is so important when people have nothing that they can access some basic food provisions while they are trying to find somewhere to lay their heads and claim asylum. And we are in the middle of a pandemic which means large numbers are not able to gather and the Dignity Centre has to restrict access to ensure social distancing and safety. This can result in many hours of waiting for people outside the Centre, which is both dangerous and undignified and there is no other solutions at this time.

I have to say I felt thrown in at the deep end this week as we arrived each day to people queuing for our services, however, between the asylum seekers and the volunteers we managed to problem solve and find solutions to the difficulties people are facing.

It is a long hard day working from 9.30am when we meet as a team, until 5pm when the Centre closes and it’s incredibly rewarding knowing that we have supported someone to make a small step forward on their journey to being settled. I have laughed and danced everyday with one person or another. My total inability to communicate in French has been a huge embarrassment but resulted in a lot of giggling and the resilience, hope and endurance of the Centre users who, every single day, have to face issues and unimaginable situations to my privileged self, continues to be an absolute inspiration to me.

I look forward to what my second week brings!”