My name is Tony. I’ve volunteered with Refugee Support since its inception in 2016. I’ve read other people’s volunteer stories with interest, but I’ve not written one of my own until now. I didn’t feel that my story was remarkable, but in a way that’s what’s remarkable about it. It shows that this is something anyone can do. It’s transformed my life along the way.

Like so many people, I felt called to action as the refugee crisis reached its peak in 2015. Up to that point, I’d read about humanitarian crises in the news, but as much as I wanted to help I didn’t know how. I’d never volunteered in any capacity. I was shy and introverted. I always thought that people more assertive than me would be of more use. But when I saw conditions in the so-called ‘Jungle’ in Calais, it felt too close to home. People were dying on our doorstep and still we did nothing. 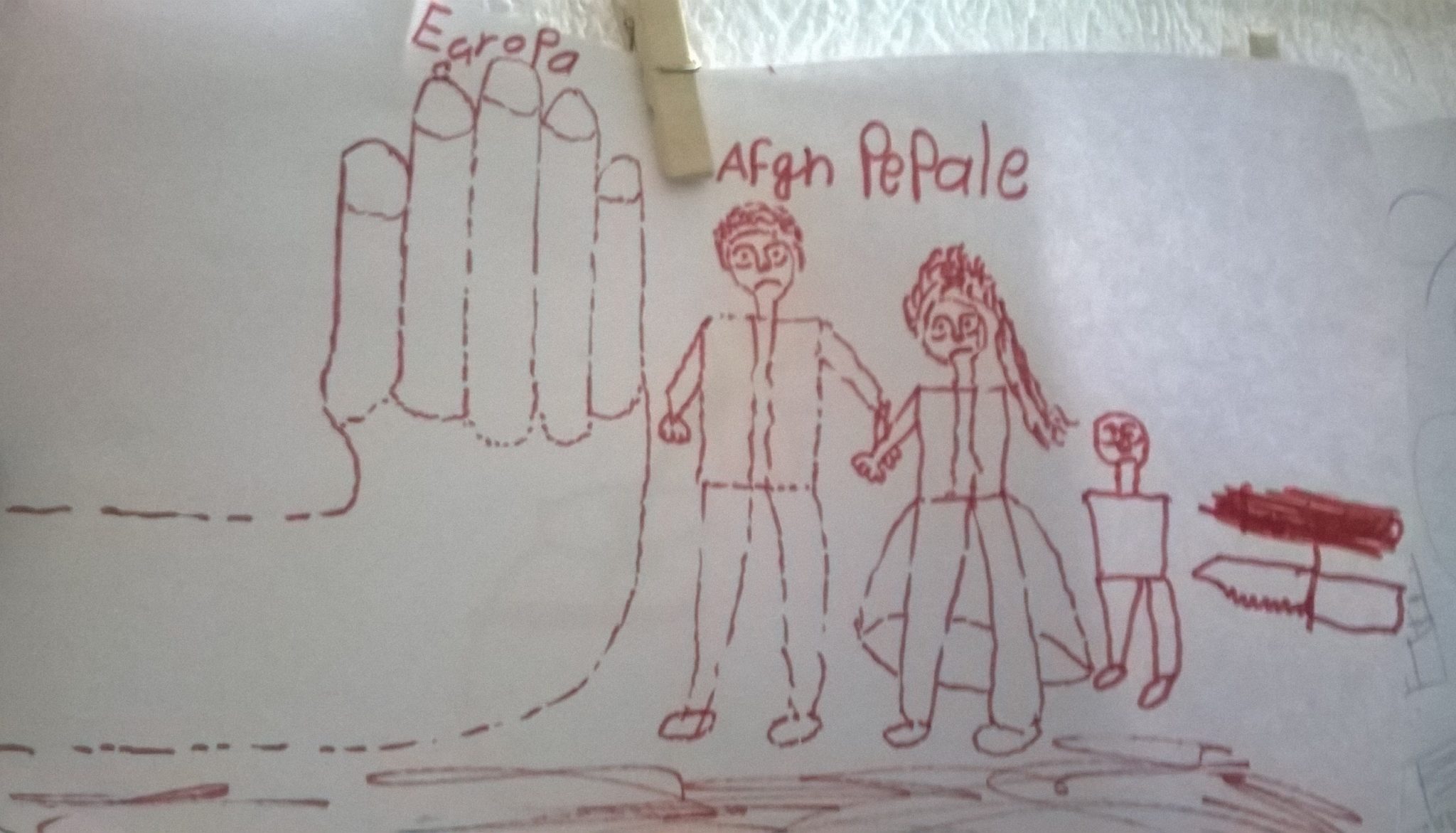 My friend Abid and I arranged a trip to Calais in October 2015 (Abid has his own story here). It didn’t take a great deal of organisation – a car journey, a ferry ride, and a student hostel. We’d planned to volunteer with one group and ended up with another. That’s how things were at the time, a little chaotic but with everyone working towards the same goals. We worked in warehouses and soup kitchens, distributed clothes in the camp, and spoke to people fleeing war and persecution from dozens of countries.

It was in Calais that I met John Sloan and Paul Hutchings. NGOs weren’t allowed to operate there, so everything was organised by the volunteers. John had immediately set to work organising a local warehouse. Paul I knew as the man with the car, ferrying people and supplies around. Both men had drive and a clear sense of purpose. They were also compassionate and
good-humoured. They were among a small group of people creating order out of chaos. I kept in touch with as many of these people as I could. They were obviously ones to follow.

That trip to Calais was very important for me. It showed that if I wanted to learn more about a situation and help people in need, I could just go there and get involved. It might seem obvious, but it can be easy to forget that what’s happening on your screen is happening in real life. Too many people view these events as just something else to argue about on social media. We’re atomised and detached from reality.

In the spring of 2016, just a few months after my time in Calais, I started to see social media posts from John and Paul. They were in Greece. Idomeni, a large refugee camp near the northern border, was closing down and the people staying there were being moved to smaller camps all over mainland Greece. John and Paul had started a small operation at a refugee camp
in Alexandreia, a former army base where people were staying in tents with the most basic of provisions. From the time I’d spent with the two of them I knew that I wanted to be involved in whatever they did next.

I organised a trip to Greece with my friend Catrin that summer (Catrin has her own story here). We felt a blast of heat as the plane doors opened in Thessaloniki. A short train ride and we were in Alexandreia. The first thing John did when we arrived was to take us on a tour of the area. The image of the first refugees we saw will stay with me forever.

Out in the fields, men, women and children were escaping the heat by bathing in an irrigation ditch. The sun sparkled on the water. Children climbed onto a pipe and leapt in with a splash. The women remained fully covered but bathed alongside everyone else. Laughter filled the air. This image encapsulated so much for me – no matter where we are, or in what situation we find ourselves, we find ways to create a bit of normality. They weren’t refugees in that moment, they were human beings. 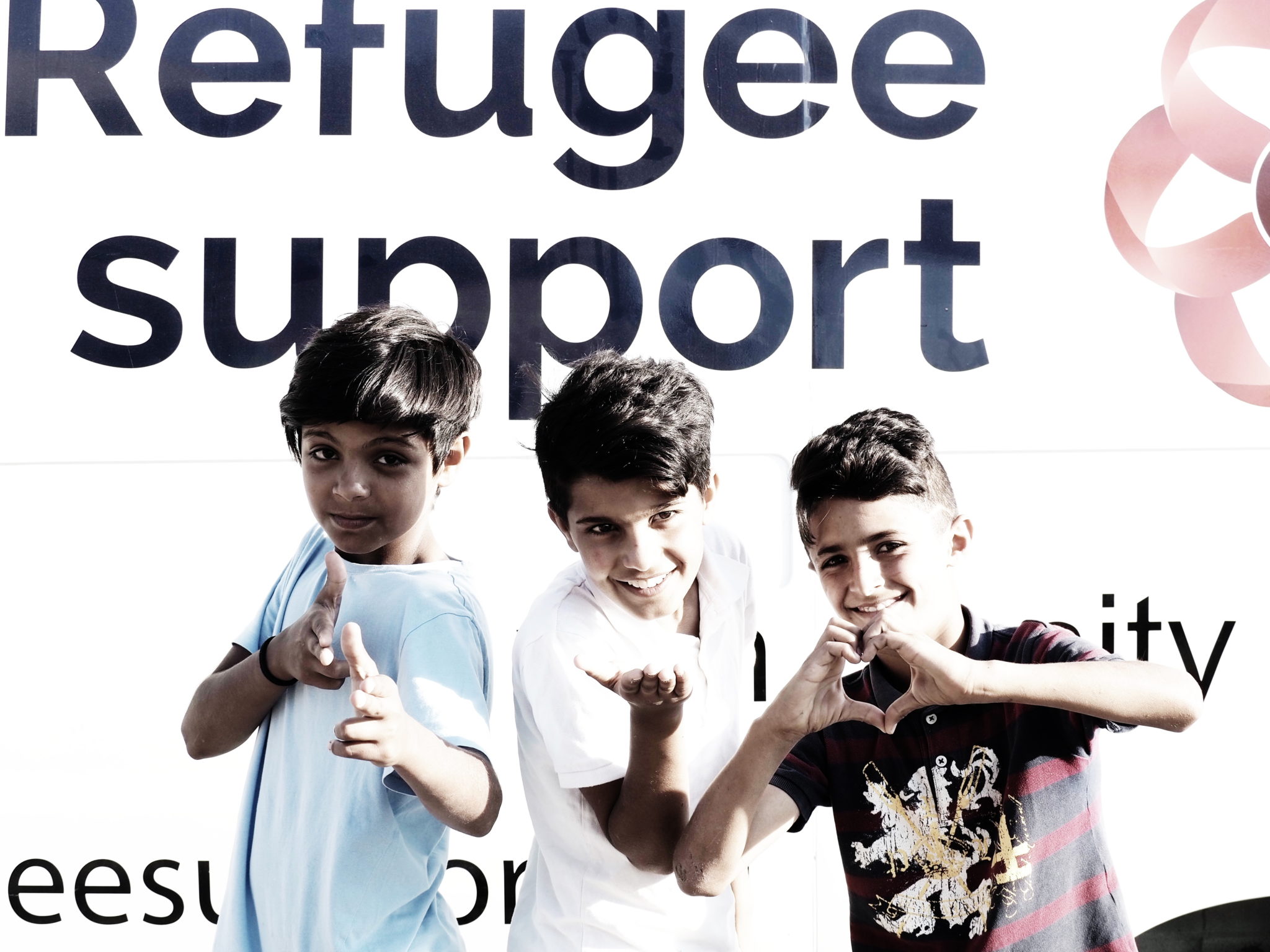 Back in the camp, conditions were dire. If the temperature outside was 40°C, that meant that it was 70°C inside the tents. In the winter months, it was just as cold inside as out. The camp had lain derelict for fifteen years. The drainage ditches had become blocked, so whenever it rained the whole camp flooded, including the tents. There was nothing to protect people from rats and mosquitoes. Several people died.

In all, I made three trips to Alexandreia. Over time I saw conditions improve, little by little. I saw the first mosquito nets arrive and the looks of sheer relief from the people receiving them. I saw the ditches cleared and cleaning facilities improved. I saw schooling provided for the children, who’d been excluded from the local education system.

Refugee Support opened its first shop at Alexandreia. At first we gave everyone more or less the same supplies. We later developed a token system that allowed people to ‘buy’ whatever products they wanted up to a certain value. From its very beginning, Refugee Support was about returning dignity to people, and we were doing just that. It was remarkable to see people going from charity recipients to savvy shoppers. They bartered. They even complained to the manager.

One of my favourite Christmases was spent in Alexandreia. On 25th December 2016, the communal kitchen at Alexandreia opened for the first time. Refugee Support had refurbished the old, abandoned kitchen on the base over a period of several months, installing a new gas supply and making the place fully operational. We banded together, volunteers alongside refugees, to chop vegetables, stir huge pots of food, and serve a Christmas meal to hundreds of diners. When I think about the true meaning of Christmas, I think of that day.

On another occasion we celebrated Nawruz, the Kurdish new year. Children danced on a makeshift stage built out of picnic tables. The Greek Army Colonel bought enough ice cream for everyone. It was wonderful As important as it is to provide basic aid, it’s also essential to create moments like these where everyone can come together. I’ll always wonder what happened to those children. I hope they’ll remember these occasions with fondness for the rest of their lives.

I’ve talked a lot about Alexandreia, but I also spent a significant amount of time in Filippiada and Katsikas in Greece, and at the Dignity Centre in Cyprus. I’ve seen a lot of changes. It’s impossible to summarise all of my experiences – I could talk about them endlessly. I’ve seen suffering. I’ve seen people missing limbs and covered in burns. I’ve seen people staring into space for hours, numb from the trauma they’ve experienced. I’ve also seen a great many reasons to be hopeful. I’ve met so many inspirational people, including both volunteers and refugees. Humanity and dignity shine through.

After the slow improvements I’d seen in Greece, a change in government saw a rapid deterioration in conditions. There was increased hostility towards the charities operating in the country and most were forced to leave. Refugees went from the camp system, which was bad enough already, to being kicked out of the camps with no money and nowhere else to go. Greece, along with most of Europe, was increasingly embracing the hostile environment doctrine.

It was at this time that we shifted our focus to Cyprus and a range of new services. We opened our first Dignity Centre in the capital, Nicosia, where I volunteered in September 2019. Three floors of a building in the centre of the city were devoted to refugees and asylum seekers who lived locally.

We co-operated with local teachers to provide adult education classes. We had showers and washing machines that anyone could use. We took care of children while their parents worked. Most notably, we set up a sewing room where people could learn new skills and earn a living for themselves. We set up a website to sell the items they made, with all profits going directly to refugees. 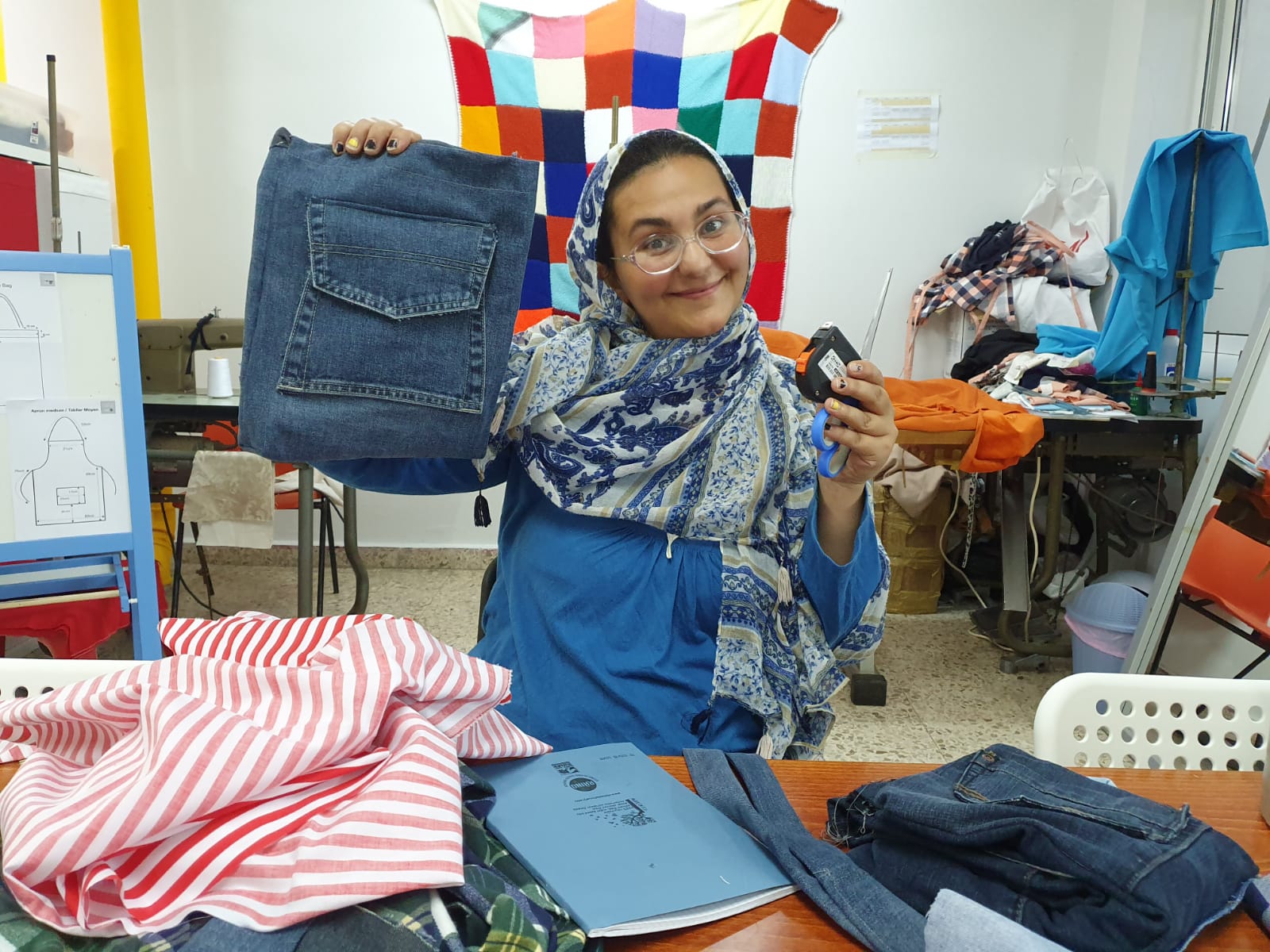 Having volunteered alongside refugees in the camps, it was fantastic to see this practice formally adopted in Nicosia. People who used the Dignity Centre regularly became trusted members of the team and wore the same uniforms as the rest of us. These refugee volunteers know more than anyone else about what refugees really need, and they’re able to offer much-needed continuity as the other volunteers come and go.

Over the years, I’ve done things I never thought I would do. I’ve organised my own fundraising events, appeared on the radio, and ventured into the worlds of journalism and filmmaking. My first published articles were on this very website. I don’t think any of this would have happened if I hadn’t taken that first step of volunteering.

Refugee Support is a small organisation when compared with the most well-known NGOs. That’s one of its strengths, that it can move quickly and adapt to circumstances. The volunteers have to be flexible. Everyone does a bit of everything. I’ve learnt so many skills I didn’t know I had, and feel like I can learn so much more. I thank Refugee Support for the opportunities it’s given to me. I know I’m not alone.

I’m immensely happy to see Refugee Support returning to Greece, where we’ve done some of our most important work. Many NGOs were forced to leave as the political tides changed, but now we’re back. This is a pivotal time for this charity, as it is for so many. Refugee Support has done remarkably well to adapt to the pandemic, and as we slowly emerge from it we need to be ready to respond to the challenges it has left in its wake.

This has been a particularly difficult time to be a refugee. Marginalised groups are always the first to suffer, but migrants have been intentionally singled out. Many governments in Europe have treated these people as pawns in a political game. Innocent people have been imprisoned behind razor wire fences. Many more have been abandoned to their fates, excluded from civil society. As I’m writing, people are drowning in the English Channel and freezing to death on the border of Poland and Belarus.

Now, more than ever, we need to come together to treat people with dignity and humanity. I can’t wait to be on the ground again to do just that. I hope to see you there. 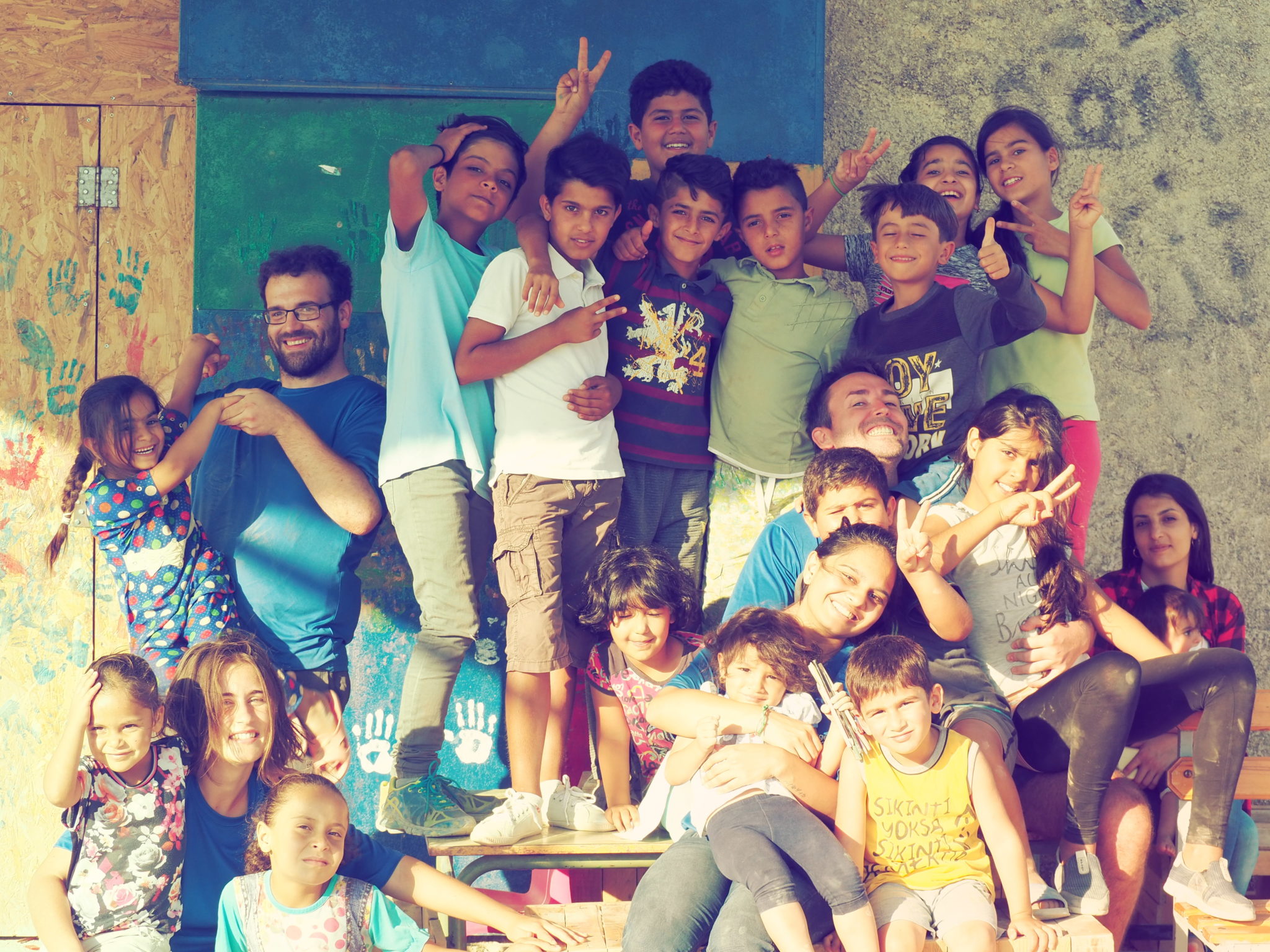