Just back from my second stint working in Camp Alexandriea in Northern Greece. It is an Army camp filled with around 800 people mostly from Syria – who are in limbo with their lives. The Camp is on a disused Army Base for the local Helicopter Battalion – it has ground slowly back to life as tents – 130 of them – were set up – portable toilets and showers installed.

This will go down in History as the biggest human crisis since the 2nd World War and we will all be implicated.

The Camp is Army run and has UNHCR and IRC on site along with just recently a Slovakian Medical team.

Refugee Support arrived into camp and Bridge2 followed shortly after to support them side by side.  Refugee Support was started by John Sloan and Paul Hutchings in response to this expanding problem of people stuck in Greece after the borders were closed. There are many camps in Greece but none quite like Alexandriea…. we have been that told on several occasions. We have also been told by several people that it is the best organised too. We have a way to go yet but the improvements in just 2 and a half short months are incredible.

There is now a warehouse, grocery ‘free’ shop and a boutique. Renovations are being carried out on another building – making a community space and eventually a kitchen with other facilities.

While there, I tend to lead the volunteers on the ground, giving direction and planning out each days jobs. The days are long hot and very full on. Much of the work is troubleshooting – so when a Refugee has an issue or problem we can direct them to the right agency to help them or just assist ourselves, if appropriate. The Shop and Boutique are high maintenance and not onlyneed manning but also stockin 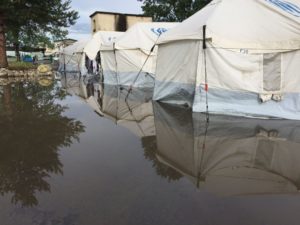 g and clearing of rubbish created by boxes etc. We need to be ready for rain at all times and then deal with the stress and anger it always produces – the stress rumbles through camp for a day or so afterwards – totally understandably so we have to find ways to help restore order.

How do I feel? Like I didn’t do enough…..like I have much more to give.

Its impossible to think ones work is ever achieving enough – yet falling into bed exhausted at the end of each day, how can one do more?

We can and we must – the circumstances that this group of mainly Syrians find themselves in is harsh – unrelenting sunshine – and then torrential rain giving way to flooding the next – dire food – no privacy – “what is there to get up for” – “I have nothing to do” – motivation to put one foot in front of the other when there is no purpose to the day is truly hard and takes stamina and fortitude.

Currently some of them are fasting in daylight hours for Ramadan – that means 5am until 9pm/10pm at night when it gets dark the tents are hot in the day and with not drinking or eating anything during this time it is taking its toll on many. Both RS and B2 are supplementing the Army food throughout Ramadan to try and give some foods they really like culturally for the time when they break their fast at night time. During the week we also try and do distribution of other necessary foods like fruit and yoghurt – it all has to be bought or when we are very lucky, it gets donated by lovely people including locals. There are other groups who have provided us with fruit and vegetables. 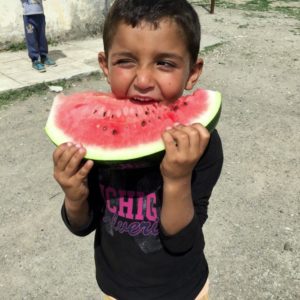 The Dr’s team donated Watermelons and we were able to give the children all an enormous slice. One farmer has bought us beautiful peaches and nectarines to distribute – it meant each tent got around 8/10. A real treat.

My head hurts when I think about the reality of where these folk are – what they have to deal with on a daily basis – how they must feel – but we must hold our heads high and continue to try to restore at least a little of their lost dignity. Imagine if it was you? Just TRY and imagine…

When they left their homes because of bombing and torture, they had NO idea they would end up here living a life totally outside their comfort zone, and with no certainty as to what the future will hold.

I remember right at the beginning when there were just a few in camp already and 2 green buses rolled through the gate and parked one behind the other – out spilled people dressed for winter on a blazing hot day – their cheeks flushed from sitting in the stifling heat of the bus – they had been travelling several hours to come to Alexandriea. The women wearing headscarves clutching crying babies and all their meagre belongings in plastic bags.

I stood for a moment as if stuck in time – it reminded me of the opening scenes in a film about the war.

I snapped back into reality and ran with another refugee to get 2 jerry cans and fill them with water for these tired and frightened people to drink. As I gave out the cups, some flinched away from me as if I was going to raise my hand to them – others grabbed the cups and sucked down the cool water, thrusting the cup to us for more. Soon they realised I was smiling and muttering kind words and not shouting and cursing them. They looked tired hot and some very sad. The army registered them and then they took all their belongings to find their allocated tent. This would become home from now on…..at least for now.

We have children on the camp – around 350 of them – many have lost a parent – lost brothers and sisters, lost aunties and uncles, lost grandparents, but they have also lost their happy childhoods, they have lost the ability to just ‘be’ children in a free and peaceful country – instead they are together in an area corralled by a wall and adjacent to a dangerous main road. Their lives are made up of running around in a tarmac’d yard – skinning their elbows and knees on a regular basis, shouting and fighting for everything that anyone cares to ‘give’ to them. They are beautiful, charming, funny, wild, hungry, children who do not know what is happening to them and most don’t care – as typical children their lives are determined by where the next food is coming from – where they can get a football – where they can get a hug or cuddle – where they can hold a hand and feel some love – they know not of their future – they live in the moment and while the parents worry about what will happen next, their screams, laughter and cries of pain when they fall over, resonate around the camp.

So we look to the future and our band of volunteers that come and go – who add value, love, thoughtfulness, compassion, raw hard work, and heaps of fun too – they give up times in their lives to help the refugees and us, while funding themselves – we hope that they get something that moves their spirit and will share the message back home telling the world that we must carry on caring – we simply must. We thank these people for adding ‘value’ into Camp Alexandriea and the people who need help so very badly.

How can YOU help? Share this message and story and touch people’s hearts and minds and donate cash too. Think of the price of a cup of coffee in town – can you/would you donate that amount each month on a standing order?

We need money and specific items please – it you can provide quantities of things and ship them please first contact Paul Hutchings to find out the current needs and the address to ship to.