[Español abajo] In the summer of 2009, just a year and a half before the war started, I planned with friends a backpacking trip through the Middle East, visiting Lebanon, Jordan and Syria. They turned out to be a few days filled with good memories.

I was sure that Lebanon and Jordan were going to be touristically impressive … but surprisingly it was Syria that left a mark on me, the place from which I keep a better memory. I was impressed by Damascus, chaotic and crowded but beautiful and vibrant at the same time, with an immense cultural life. I loved the crusading fortress of the Crac des Chevaliers, I felt the weight of the centuries crossing the ruins of Palmyra in the extreme east of the Roman Empire. I wandered in Aleppo, losing myself in the gigantic souk of Al-Madina. How to forget the Aleppo souk! Sadness overtakes me when I realize how today only ashes remain.

But above all, from Syria it is from its people what we got the best impression. Wherever we went we were greeted with a smile. They were delighted about our visit, and always willing to help us, showing a great sense of humour despite the tough conditions of Ramadan in the middle of August. I would not want to bore you with details of such an unforgettable journey.

The years passed. The war began, and I could not help feeling a tight knot in my stomach whenever I saw the news. It’s been 5 years of bad and worse news. Years of seeing how the very people who had treated me with such affection and kindness, had to flee their homes.

A few months ago I went to an exhibition about the refugees’ drama, and one of those shocking photos left me broken. It was a simple picture of a razor wire, but it was the message that impacted me. I reproduce the caption that accompanied it:

The Strength of Sacrifice
Depart with only what you are wearing. A blanket, a backpack, some savings, some clothes
Fill the pockets of memories, the lightest
Take the child out of the crib without knowing when you can feed him again
Close the door of your house for the last time
Put him in a boat or take him to a train anchored in the hope that it will take you where life exists
Faced with the certainty of knowing that he will die under the bombs, hope has a kind of doubt: that of whether he will come to know the other shore. The other side of the fences
After leaving everything you built, there is no fence high enough to curb the strength of this sacrifice

And then, I could not take it anymore. I had to do something. I searched the Internet, surfed dozens of websites, asked many people and talked to many others. It turned out that it was not so easy to find a project that combined an effective grassroots work and at the same time had no requirements on my part that I could not meet (being a doctor / teacher / translator …). I only had my enormous desire to be helpful, and 3 weeks of vacation I had fought to get, even working at weekends.

Then, one day, I was fortunate to stumble upon the Refugee Support website. I really liked the style they seemed to have of doing things. I read some testimonials from former volunteers and did not hesitate for a moment. I got in touch with them, and immediately Paul wrote to me to chat in videoconference. Soon we understood each other, and within a few days I had my trip planned.

On September 23rd I arrived at Thessaloniki airport, and after taking several transports, I finally arrived at the Hotel Manthos, which would become my home on the days I was in Alexandria. There I met John, alma mater of the project and Sarah, great volunteer for many months of RSG and who now continues its Bridge2 project. It was also my first contact with those who, with permission from the refugees, were the best thing that happened to me in all my experience: my fellow volunteers. It is hard to believe how deep personal ties can be created by sharing just a few days. That same night I laughed as much as I had in a long time, ending up at the “Desperados” pub, which soon would become a classic of our nights. 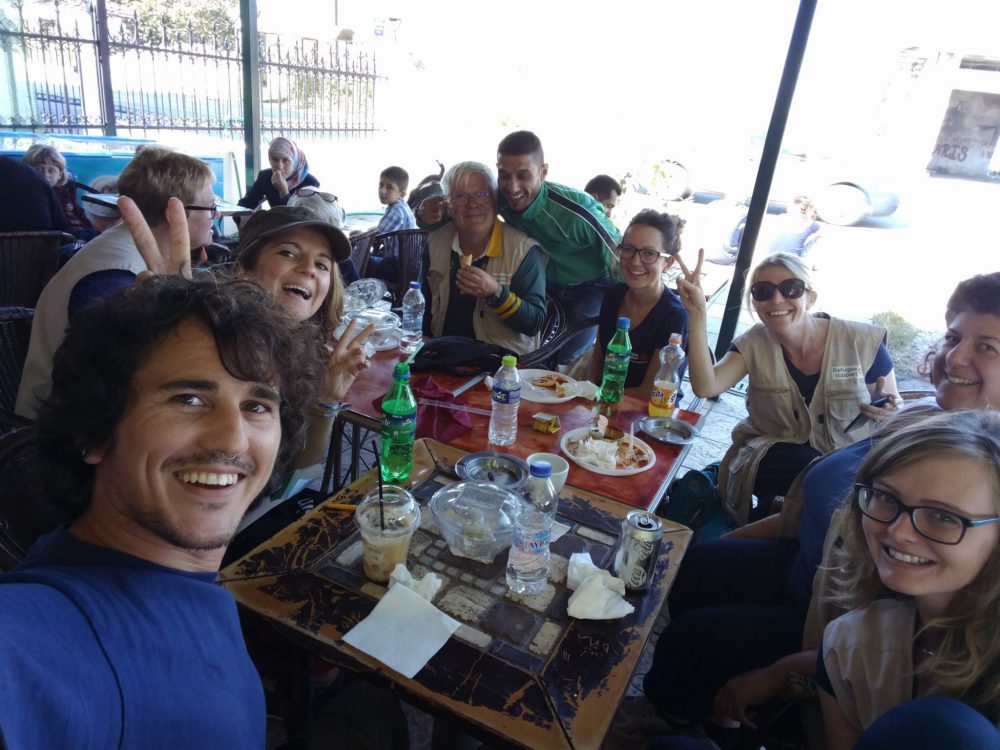 The next morning was my first group meeting, and then a day filled with information and the first contact with the camp and the refugees. I recognize that my first impression with the children was of “terror”. So much energy! A few days later I knew many of their names, and laughing and playing with them was the best time of day. Impossible to forget their laughter when we played the fool singing songs and playing the ukulele. It’s been over two months and I still miss them all the time.

After that first contact, days filled with activities that stretched as if they were weeks, and weeks that seemed like months. I find it difficult to tell you the number of things one could do throughout the day. In the same day it was possible to: drive the big van, buy yogurts at the supermarket, play with the children on the swings, attend to smiling customers in the supermarket, distribute tickets in field tents for the distribution of clothing, help nearly 30 people in the boutique to choose clothes from donations, organize boxes for a food delivery in our neighbour field in Veria, drive there and make the distribution for dozens of families, return, have a shower, dinner and finish the day having a drink in Desperados. We did not even have a minute of rest, nor did we need it. Enjoying every second of each task, laughing at simple happiness. 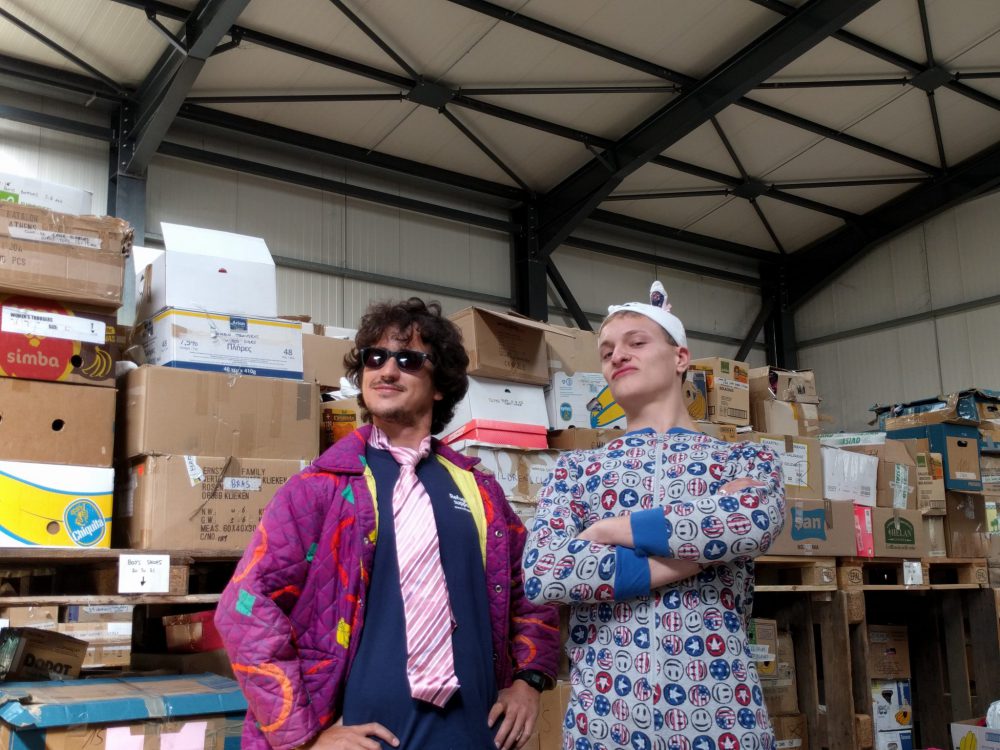 For 3 weeks I rested just one morning, in which the body told me “stop” and I had to return to the hotel half a day. Feeling that I was taking part in a project like this gave me some kind of “infinite energy”. There was no sleep or fatigue that could slow us down.

One day John and Paul asked me if I wanted to participate in a new project that they wanted to set up in another refugee camp, west of Greece: in Filippiada. I should help Pelle and Shannon, two former volunteers, starting from almost zero, to lay the foundations and begin the same activities that we carried out in Alexandria but in that chaotic camp south of Ioannina. Although I initially had mixed feelings about having to leave the city and the field I already considered my home, of course I said yes.

That last week in the field of Filippiada was an unforgettable experience. After meeting with UNHCR, we went to see the site, and found a much more disorganized camp than Alexandria’s, in worse conditions, and a huge warehouse full of useless junk. From that warehouse a certain distribution of food and clothing had been made, but not with the standards of organization, quality and dignity with which we were accustomed in Refugee Support. Dignity is the key word. We pulled our socks up and in less than a week we revolutionized the delivery system; cleaned, painted and arranged a room where we set up a men’s boutique, building the wooden shelves with our own hands. We also left practically ready the room that later would work as Mini Market. That first “strike force” with Shannon, Pelle and John did a spectacular job. Guys, you are great, and I miss you all. 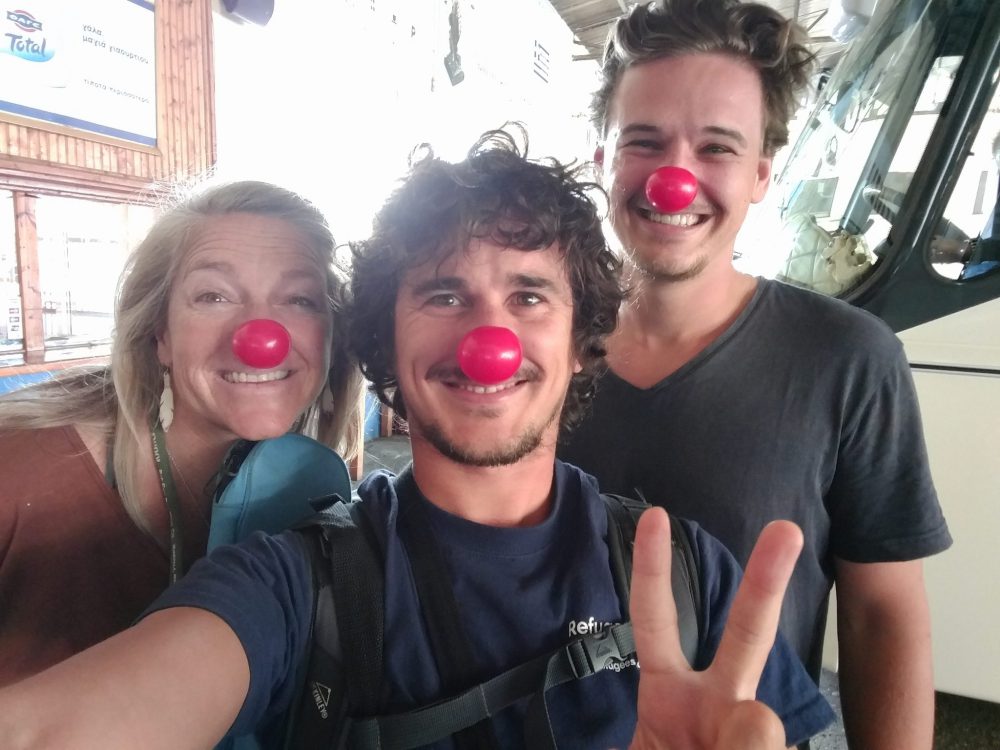 In a week the progress was amazing, people were surprised with what we accomplished. Weeks after my departure I have proudly followed the development, feeling it as something of my own, and today the warehouse has nothing to do with what we found at the beginning of October. 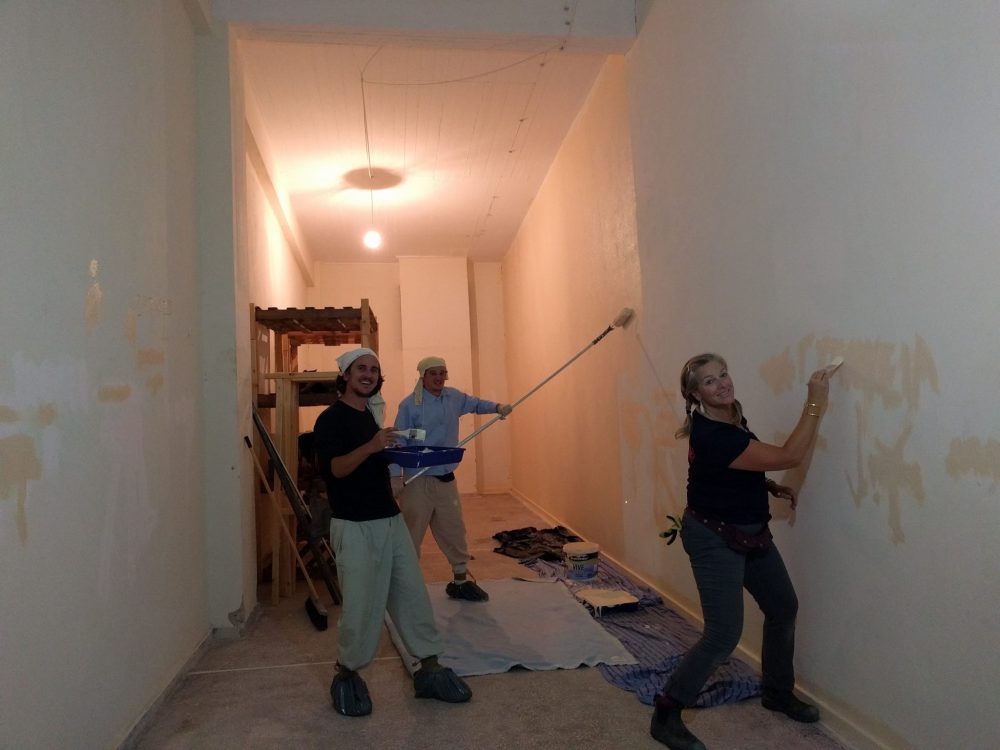 I do not want to go on (even) more. I have dozens of pages written in my diary. I could talk about each of the people I’ve met, the disheartening stories that the refugees told us, or the beautiful moments I had with them, the absolutely wonderful people of Greece that I was lucky enough to meet, or their spectacular food. So many things can happen in 3 weeks. It’s incredible.

I just have words of thanks to John and Paul for the opportunity they gave me. I know I took much more than I contributed. Sometimes I wonder what moves a person to work as a volunteer on a project like this. In my case I do not know if it was a selfish impulse. But blessed are the selfish impulses that move hundreds of people to fight with all their strength in countering what a few undesirable unscrupulous continue to cause.

In this war that nobody understands, but that has marked the lives of so many people.