Bringing Cardiff People Together With Music

On Thursday 28th of September, Cardiff’s local bastion of live music, The Moon, which was recently reopened as a community funded venue subsisting on donations itself, hosted a night of wonderful music to raise funds for Refugee Support. Despite the gig taking place on a week night, and the arrival of an unprecedented amount of rain, it was very well attended. All of the artists gave their time and considerable talent for free and we raised just over £200. 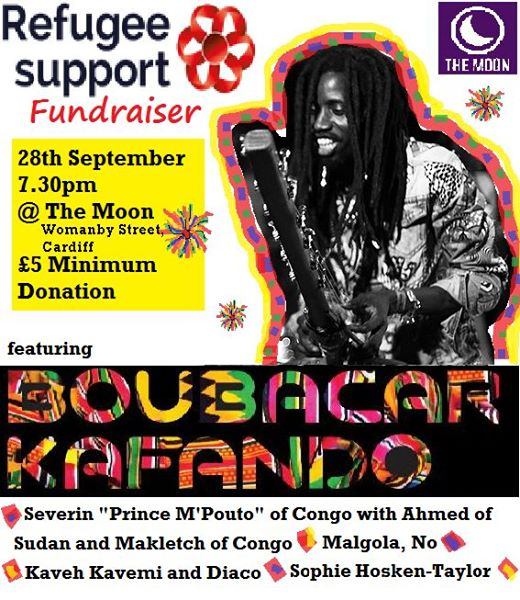 Sophie Hosken-Taylor kicked off the night with her haunting vocals and guitar. We then enjoyed some absolutely beautiful Ney (flute) music from local Persian Iranian refugee Diaco, supported by Djembe drumming from Makletch who is a refugee and asylum seeker from the Congo.

Polish artist Małgola, No‘s catchy pop songs on Casio keyboard were well received. It was her first ever performance abroad and there was some audience participation in the form of rhythmic clapping.

Regular local performers and refugee and asylum seekers Severin “Prince M’Pouto” of the Congo, Makletch, and Ahmed of Sudan followed with some energetic and skilled Djembe drumming which got the audience away from their drinks for some high octane dancing (including a mash-up of West-African and Iranian moves!), and Severin‘s beautiful singing which brought the room to a hush.

Boubacar Kafando, from Burkina Faso by way of France, had fortuitously found himself in Wales that week, and filled the headlining slot with stunning Kora, backed up by Severin and friends on Djembe.

The best thing about the gig was the strong presence and involvement of local refugee musicians, and there were also several refugee attendees who found out about the event through the local asylum and refugee support organisation The Oasis Centre. People who might not have otherwise met in their daily lives were brought together to enjoy a night of music and fun, and importantly, to raise awareness of Refugee Support and the wider plight of refugees. I hope that we will be able to do something similar in Cardiff again in the future, so watch this space!……